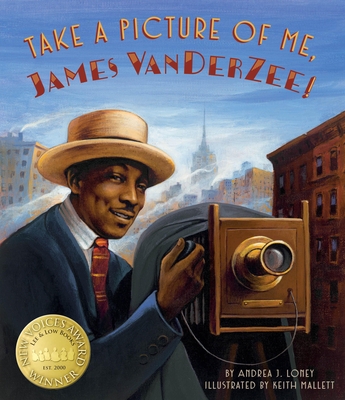 Take a Picture of Me, James Van Der Zee!

James VanDerZee was just a young boy when he saved enough money to buy his first camera. He took photos of his family, classmates, and anyone who would sit still for a portrait. By the fifth grade, James was the school photographer and unofficial town photographer.

Eventually he outgrew his small town and moved to the exciting, fast-paced world of New York City. After being told by his boss that no one would want his or her photo taken by a black man, James opened his own portrait studio in Harlem. He took photographs of legendary figures of the Harlem Renaissance-politicians such as Marcus Garvey, performers including Florence Mills, Bill Bojangles Robinson, and Mamie Smith-and ordinary folks in the neighborhood too. Everyone wanted fancy portraits by James VanDerZee.

Winner of Lee & Low's New Voices Award, Take a Picture of Me, James VanDerZee tells the story of a groundbreaking artist who chronicled an important era in Harlem and showed the beauty and pride of its people.

Andrea Loney is a screenwriter with an MFA in dramatic writing from New York University. She won the 2014 Lee & Low New Voices Award for Take a Picture of Me, James VanDerZee!. Loney lives in California. Keith Mallett has been drawing and painting for as long as he can remember. As an artist and designer, he has created posters and fine art prints for more than thirty years. He had the pleasure of attending the original James VanDerZee exhibit, Harlem on my Mind, at the Metropolitan Museum of Art and was delighted to work on this biography. Mallett lives in San Diego, California, with his wife and their German Shepherd.
Loading...
or support indie stores by buying on