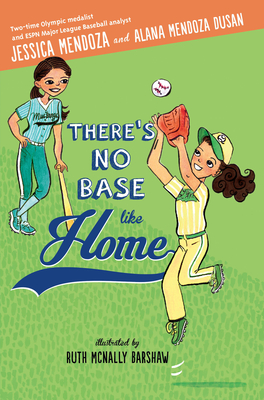 This will be twelve-year-old Sophia Maria Garcia's best year ever: she's trying out for the same championship softball team her sister played on at her age, and she's starting middle school. New school, new team, new Sophia

But all does not go according to plan. Sophia does not make the Waves softball team and her best friend is suddenly more interested in boys than Sophia. As the middle school blues set in, and her family is pulled in different directions, Sophia must reach deep down and find a little UMPH-the difference between being good and great-to figure out her own place, on and off the field.

ESPN Major League Baseball analyst and two-time Olympic medalist Jessica Mendoza teams up with her sister Alana Mendoza Dusan for their first highly-illustrated novel for young readers, based on their own childhood softball adventures.

Jessica Mendoza is currently an MLB analyst for Sunday Night Baseball, ESPN's premier MLB franchise. She is the first female analyst in MLB postseason history, and ESPN's first ever female MLB analyst. Jessica also serves as a contributor on ABC's Good Morning America. She won a gold & silver Olympic medal in 2004 and 2008, respectively, as a member of the US Women's Softball Team. Jessica's younger sister, Alana Mendoza Dusan, was a Division 1 softball player (2B/UT) at Oregon State University. A lifelong Dodger fan, she is currently a high school English teacher who lives in Bend, Oregon, with her husband and two children. Alana's passion is to motivate younger generations to pursue their dreams, and she loves taking advantage of all the outdoor activities Central Oregon has to offer. Ruth McNally Barshaw is the illustrator of seven books for young readers, including the Ellie McDoodle Diaries, which she also wrote. She resides in Michigan.
Loading...
or
Not Currently Available for Direct Purchase