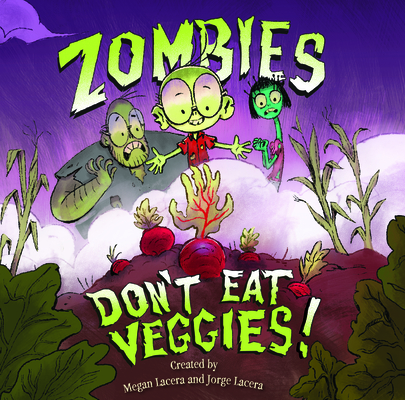 In this delightful debut by a talented husband-and-wife team, Mo Romero is a zombie with a deep, dark secret...

Mo Romero is a zombie who loves nothing more than growing, cooking, and eating vegetables. Tomatoes? Tantalizing. Peppers? Pure perfection The problem? Mo's parents insist that their ni o eat only zombie cuisine, like arm-panadas and finger foods. They tell Mo over and over that zombies don't eat veggies. But Mo can't imagine a lifetime of just eating zombie food and giving up his veggies. As he questions his own zombie identity, Mo tries his best to convince his parents to give peas a chance.

Super duo Megan and Jorge Lacera make their picture-book debut with this sweet story about family, self-discovery, and the power of acceptance. It's a delectable tale that zombie and nonzombie fans alike will devour.

JORGE LACERA was born in Colombia, and grew up in Miami, Florida, drawing in sketchbooks, on napkins, on walls, and anywhere his parents would let him. After graduating with honors from Ringling College of Art and Design, Jorge worked as a visual development and concept artist. As a big fan of pop culture, comics, and zombie movies, Jorge rarely saw Latino kids as the heroes or leads. He is committed to changing that, especially now that he has a son. The family lives in Cypress, Texas. You can find him online at studiolacera.com. Megan Lacera grew up in the suburbs of Cleveland, Ohio, with a book always in her hands. She became a writer and creator of characters and worlds for entertainment companies, and later formed her own creative company with husband Jorge Lacera. After reading many stories to their son, Megan realized that very few books reflected a family like theirs--multicultural, bilingual, funny, and imperfect. She decided to change that by writing her own stories. This is Megan's original picture book debut. You can learn more about Megan and Studio Lacera at studiolacera.com.
Loading...
or support indie stores by buying on