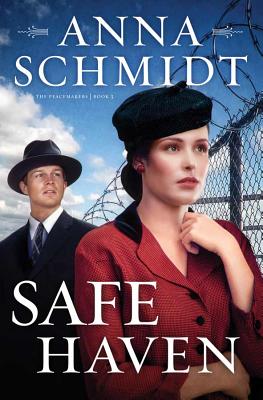 When journalist Suzanne Randolph hears about FDR’s plan to bring a boatload of displaced WWII refugees to America, she knows it may be her last chance to redeem her flagging career. Suzanne follows the story to Oswego, New York, where she meets Theo Bridgewater, a Quaker dairy farmer from Wisconsin who has come to reunite with his uncle and aunt and cousin. Theo’s fight to spare his relatives the return to Germany becomes Suzanne’s fight as she does everything that the “power of the pen” can muster to help win public sympathy for the cause.

Praise For Safe Haven (The Peacemakers)…

Safe Haven is an incredibly moving story that explores a unique take on the popular World War II genre. I did not know about the displaced refugees that were brought to America towards the end of the war so I found that angle completely fascinating. And what a backdrop it makes as Schmidt weaves diverse tales of survival and hope among a cast of fascinating characters. At the forefront, Theo and Suzanne's friendship and eventual romance are the common thread that weave it all together. I became invested in their stories from the very first chapter. A compelling, stirring read that showcases the resiliency of humanity after the onslaught of despair. Truly remarkable.
— Kav Rees

Anna has woven history into her story so seamlessly, you feel you are reading an historical account of actual events, or maybe a biography. There is nothing formulaic in Anna's writing, her characters are believable and real, and her events match up with the history of the era. The friendship between Suzanne and Theo builds into love and becomes something very beautiful even with some ups and downs.
— Becky Guinn

Schmidt's third book in the Peacemakers series is just as powerfully written as the first two installments. The prose style is masterful, and you'll get swept up in the sorrows and joys each character faces. Recurring characters' stories are intricately woven together to form a superbly intriguing tale.
— Michele Hagenlock

Anna Schmidt is the author of over twenty works of fiction. Among her many honors, Anna is the recipient of Romantic Times’ Reviewer’s Choice Award and a finalist for the RITA award for romantic fiction. She enjoys gardening and collecting seashells at her winter home in Florida.