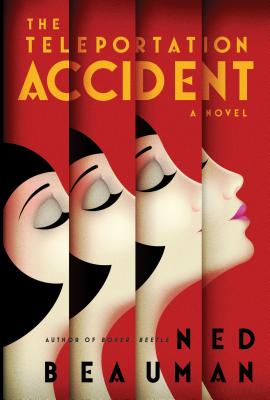 Long-listed for the 2012 Man Booker Prize, The Teleportation Accident is a hilarious sci-fi noir about sex, Satan, and teleportation devices.
When you haven’t had sex in a long time, it feels like the worst thing that could ever happen.

If you’re living in Germany in the 1930s, it probably isn’t.

But that’s no consolation to Egon Loeser, whose carnal misfortunes will push him from the experimental theaters of Berlin to the absinthe bars of Paris to the physics laboratories of Los Angeles, trying all the while to solve two mysteries: Was it really a deal with Satan that claimed the life of his hero, Renaissance set designer Adriano Lavicini, creator of the so-called Teleportation Device? And why is it that a handsome, clever, modest guy like him can’t—just once in a while—get himself laid?
Ned Bauman has crafted a stunningly inventive, exceptionally funny, dangerously unsteady and (largely) coherent novel about sex, violence, space, time, and how the best way to deal with history is to ignore it.


Praise For The Teleportation Accident: A Novel…

“Endlessly witty and furiously inventive, Ned Beauman's second novel... consolidates [his] stature as a formidably accomplished writer... Beauman flaunts an almost indecently pleasurable way with words as he piles on outrageous developments... This [is a] dazzling entertainment. It's rare for a book to stimulate the brain cells and the funny bone with equal gusto, but Beauman has a knack for embedding trenchant philosophical blasts in punch lines... You laugh, then you flinch. On the evidence of his first novel, Boxer Beetle, and now this brilliantly clever and covertly humane book, Beauman promises to keep us laughing and flinching for years to come.” —The Washington Post

“Brilliant... If there was ever any worry that [Beauman] might have crammed all his ideas into his first book, the prize-winning Boxer, Beetle, this makes it clear he kept a secret bunker of his best ones aside.” —Joe Dunthorne, The Guardian

“Fiendishly clever... This fizzy novel is a great time machine all its own, jumping between the Renaissance and the future, flirting with noir, sci-fi, and romance, and skewering the ‘same empty people going to the same empty parties' along the way. Every generation gets the hipster satire it deserves. But this one's for every generation. Grade: A” —Melissa Maerz, Entertainment Weekly

“Inspired... Beauman has an unflagging imagination and an indefatigable gift for comedy.” —Publishers Weekly

“Funny and startlingly inventive... Beauman is undoubtedly a writer of prodigious talent, and there are enough ideas [here]... to fill myriad lesser novels.” —The Financial Times

“Brilliantly written... A confounding sci-fi-noir-comedy mashup overstuffed with astute social observations, high-brow literary allusions, stupendous Pynchonian names and prose so odd and marvelous that every few pages I had to stop and reread a passage.” —Jennifer Reese, NPR.org

“There is so much going on in this truly bizarre novel—everything from slapstick to noir to steampunk—that discombobulated readers may feel as though they’ve fallen down a narrative wormhole. But what a wormhole! ... Brilliant.” —Bill Ott, Booklist (starred review)

“The oversized, exuberant, and farcical plot of The Teleportation Accident is more entertaining than any summary can convey... [Beauman] has the knack for populating his tale with absurd secondary characters, spinning seemingly minor details into long-running jokes, and for placing his protagonist into precarious, comically rich scrapes. The result is rewarding; there are no such thing as pointless digressions in The Teleportation Accident, just the rollicking tale of a hapless Loeser following his heart.” —Daily Beast

“As wild a cast of eccentrics and madmen, scammers and venal self-servers, hapless saps and trodden-down dreamers, as you have seen since the heyday of J. P. Donleavy or Evelyn Waugh… Teleporting directly into the ranks of such mythomaniacal jesters as Nick Sagan and Christopher Moore, Ned Beauman kicks any sophomore qualms to the curb.” —B&N Review

“Incredibly intelligent, fantastically distracted... You won't read a more memorable novel about sex, obsession and the sticky stuff of science fiction this year, if ever....Profoundly funny, and on the sentence level, simply exhilarating.” —Tor.com

“Bizarre, original, and satisfying... [Beauman is] a special talent... He takes the sort of risks that writers under 30 should take, but rarely do.” —BookPage

“Beauman has created a wacky mash-up of a hefty number of genres -- historical fiction, noir, slapstick, science fiction and satire -- populated by sinners, ghouls and Caltech physicists and set mainly in the pre-World War II period. And, yes, there is a teleportation device.” —Star-Telegram (Fort Worth

“Popping with ideas, fizzing with vitality, and great fun.” —The Independent on Sunday

“A glorious, over-the-top production, crackling with inventive wit and seething with pitchy humour . . . It's as if the English tradition of humorous novels (PG Wodehouse, Kingsley Amis, Evelyn Waugh) and American comic fiction (Thomas Pynchon, Kurt Vonnegut, John Barth) have had their molecules recombined . . . A beguiling success.” —The Scotsman

“If you care about contemporary fiction, you must read this.” —Tatler

Ned Beauman was born in 1985 and studied philosophy at the University of Cambridge. His first novel, Boxer, Beetle, won a National Jewish Book Award and the Writers’ Guild of Great Britain Award, and was shortlisted for the Desmond Elliott Prize and the Guardian First Book Award. He has recently lived in Berlin, London, Istanbul, and New York.
Loading...
or support indie stores by buying on