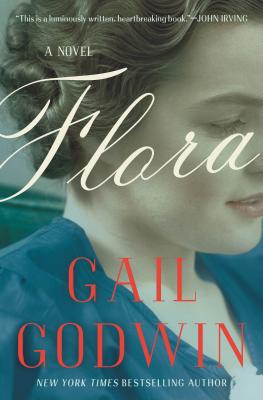 Ten-year-old Helen and her summer guardian, Flora, are isolated together in Helen's decaying family house while her father is doing secret war work in Oak Ridge during the final months of World War II. At three Helen lost her mother and the beloved grandmother who raised her has just died. A fiercely imaginative child, Helen is desperate to keep her house intact with all its ghosts and stories. Flora, her late mother's twenty-two-year old first cousin, who cries at the drop of a hat, is ardently determined to do her best for Helen. Their relationship and its fallout, played against a backdrop of a lost America will haunt Helen for the rest of her life.

This darkly beautiful novel about a child and a caretaker in isolation evokes shades of The Turn of the Screw and also harks back to Godwin's memorable novel of growing up, The Finishing School. With its house on top of a mountain and a child who may be a bomb that will one day go off, Flora tells a story of love, regret, and the things we can't undo. It will stay with readers long after the last page is turned.


Praise For Flora: A Novel…

“Flora is a beautiful examination of character and the far-reaching repercussions of our actions. Gail Godwin brings grace, honesty, and enormous intelligence to every page.” —Ann Patchett

“A classic southern tale galvanic with decorous yet stabbing sarcasm and jolting tragedy . . . Godwin's under-your-skin characters are perfectly realized, and the held-breath plot is consummately choreographed. But the wonder of this incisive novel of the endless repercussions of loss and remorse at the dawn of the atomic age is how subtly Godwin laces it with exquisite insights into secret family traumas, unspoken sexuality, class and racial divides, and the fallout of war while unveiling the incubating mind of a future writer.” —Donna Seaman, starred review, Booklist

“As usual with Godwin, the protagonists are surrounded by secondary characters . . . Unsparing yet compassionate; [Flora is] a fine addition to Godwin's long list of first-rate fiction bringing 19th-century richness of detail and characterization to the ambiguities of modern life.” —starred review, Kirkus Reviews

“[A] stirring and wondrous novel from Godwin . . . [Her] thoughtful portrayal of their boredom, desires, and the eventual heartbreak of their summer underscores the impossible position of children, who are powerless against the world and yet inherit responsibility for its agonies.” —starred review, Publishers Weekly

“I've long thought of Gail Godwin as a present-day George Eliot--our keenest observer of lifelong, tragically unwitting decisions. Helen's story, which she tells us when she is an older woman, is focused on the summer when she was a precocious ten-year-old. Her mother is dead, and the 'haunted little girl' has more recently lost her grandmother. Flora (the first cousin of Helen's late mother) is looking after Helen for the summer. Helen seems much smarter and more sophisticated than her unwanted, twenty-two-year-old companion from Alabama; Helen believes that Flora is the one who needs looking after. 'Remorse is wired straight to the heart,' the older Helen tells us. Gail Godwin's Flora is similarly wired--straight to the heart. The events of Helen's haunted and most formative summer are perfectly plotted to unhinge her; what happens to Helen and Flora will make Helen the woman (and the writer) she becomes. (Helen tells us that a collection of her stories is 'about failed loves.') Flora is a novel as word-perfect and taut as an Alice Munro short story; like Munro, Godwin has flawlessly depicted the kind of fatalistic situation we can encounter in our youth--one that utterly robs us of our childhood and steers the course for our adult lives. This is a luminously written, heartbreaking book.” —John Irving

“Flora makes a vivid impression. A masterful novelist, Woodstock resident Godwin reminds readers how the derailments of youth can change the direction of adult life.” —Chronogram

“This darkly beautiful novel about a child and a caretaker in isolation evokes shades of The Turn of the Screw and also harks back to Godwin's memorable novel of growing up, The Finishing School. With its house on top of a mountain and a child who may be a bomb that will one day go off, Flora tells a story of love, regret, and the things we can't undo. It will stay with readers long after the last page is turned.” —BookMagnet

“Three-time National Book Award finalist Godwin creates memorable characters and conversations that carry us effortlessly toward a dark denouement, one that infuses the rest of Helen's life with profound appreciation for Flora's unguarded heart.” —People magazine