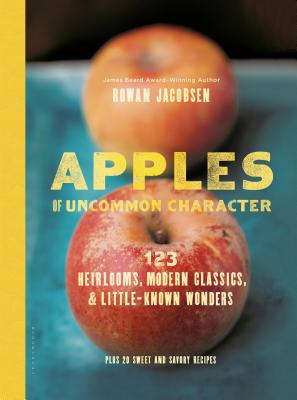 In his classic A Geography of Oysters, Rowan Jacobsen forever changed the way America talks about its best bivalve. Now he does the same for our favorite fruit, showing us that there is indeed life beyond Red Delicious-and even Honeycrisp. While supermarkets limit their offerings to a few waxy options, apple trees with lives spanning human generations are producing characterful varieties-and now they are in the midst of a rediscovery. From heirlooms to new designer breeds, a delicious diversity of apples is out there for the eating.

Apples have strong personalities, ranging from crabby to wholesome. The Black Oxford apple is actually purple, and looks like a plum. The Knobbed Russet looks like the love child of a toad and a potato. (But don't be fooled by its looks.) The D'Arcy Spice leaves a hint of allspice on the tongue. Cut Hidden Rose open and its inner secret is revealed.

With more than 150 art-quality color photographs, Apples of Uncommon Character shows us the fruit in all its glory. Jacobsen collected specimens both common and rare from all over North America, selecting 120 to feature, including the best varieties for eating, baking, and hard-cider making. Each is accompanied by a photograph, history, lore, and a list of characteristics. The book also includes 20 recipes, savory and sweet, resources for buying and growing, and a guide to the best apple festivals. It's a must-have for every foodie.

“[Jacobsen] covers 123 varieties (a small sample of the thousands grown worldwide) with a photo of each. He's an excellent guide, giving taste, texture, cooking and storage profiles.” —Florence Fabricant, The New York Times

“Apples of Uncommon Character pays tribute to some of North America's finest and most obscure specimens, reviving the lost art of apple appreciation in the process.” —Salon

Rowan Jacobsen is the author of the James Beard Award-winning A Geography of Oysters as well as American Terroir, Apples of Uncommon Character, and other books. His books have been named to numerous top ten lists, and he has been featured on All Things Considered, The Splendid Table, Morning Edition, and CBS This Morning, and in the pages of Bon Appétit, Saveur, the Wall Street Journal, the Washington Post, and elsewhere. He lives in Vermont.