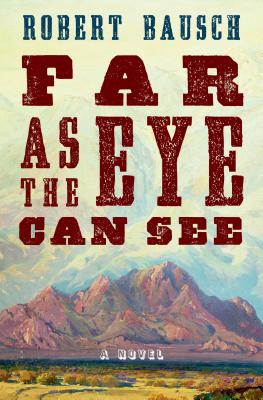 Far as the Eye Can See

“It is a delight to experience the Montana and Wyoming territories circa 1870-1876 through the adventures of Civil War veteran Bobby Hale. His original plan to travel to California fades as he rides west with settlers, scouts for the army, and cares for an injured woman who is running from her Indian husband. The dialect of the narrator and the language of the characters are accurate for the period, allowing the reader to be completely immersed in the setting of this rip-roaring tale.”
— Paula Steige, MacDonald Book Shop, Estes Park, CO
View the List

Bobby Hale is a Union veteran several times over. After the war, he sets his sights on California, but only makes it to Montana. As he stumbles around the West, from the Wyoming Territory to the Black Hills of the Dakotas, he finds meaning in the people he meets-settlers and native people-and the violent history he both participates in and witnesses. Far as the Eye Can See is the story of life in a place where every minute is an engagement in a kind of war of survival, and how two people-a white man and a mixed-race woman-in the midst of such majesty and violence can manage to find a pathway to their own humanity.

Robert Bausch is the distinguished author of a body of work that is lively and varied, but linked by a thoughtfully complicated masculinity and an uncommon empathy. The unique voice of Bobby Hale manages to evoke both Cormac McCarthy and Mark Twain, guiding readers into Indian country and the Plains Wars in a manner both historically true and contemporarily relevant, as thoughts of race and war occupy the national psyche.


Praise For Far as the Eye Can See: A Novel…

“With a setting gleaming with historical accuracy and a protagonist whose voice is right out of Twain, Bausch's novel is a worthy addition to America's Western literary canon, there to share shelf space with The Big Sky, Little Big Man and Lonesome Dove.” —Kirkus Reviews, starred review

“As expansive as the country it traverses, Bausch's majestic odyssey through the Old West finds rich nuance in a history often oversimplified . . . The novel's patient, searching first-person narration is finely balanced, with a voice at once straightforward and lyrical, grand and particular. Bausch's characters defy facile judgments; each is sharply distinctive, yet all struggle to find a footing amid the clash of human difference that is, in Bobby Hale's words, the ‘most spacious war of all.'” —Publishers Weekly

“Bausch's voice is more Mark Twain than Larry McMurtry . . . [He] is perceptive without being preachy, and he grants Hale a wide range of emotions while preserving a recognizable strand of stoic masculinity.” —Booklist

“Bausch captures the immense measure of the American landscape . . . Not to be missed by historical fiction fans.” —Library Journal

“Characters like the enigmatic yet relatable Bobby Hale are a real prize in literature . . . . Far As the Eye Can See is a superb western with bold ideas, but it is also daring in its ability to build fresh concepts while maintaining the tried-and-true dynamic of humanity emerging within individuals through war . . . A gripping and engaging tale.” —Book Reporter