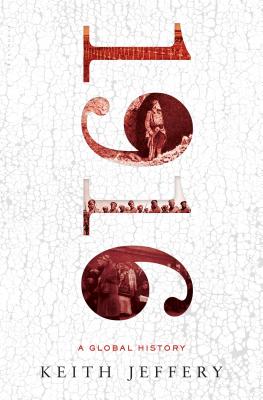 So much of the literature on the First World War centers on the trench warfare of the Western Front, and these were essential battlegrounds. But the war was in fact truly a global conflict, and by focusing on a sequence of events in 1916 across many continents, historian Keith Jeffery's magisterial work casts new light on the Great War.

Starting in January with the end of the catastrophic Gallipoli campaign, Jeffery recounts the massive struggle for Verdun over February and March; the Easter Rising in Ireland in April; dramatic events in Russia in June on the eastern front; the familiar story of the war in East Africa, where some 200,000 Africans may have died; and the November U.S. presidential race in which Woodrow Wilson was re-elected on a platform of keeping the United States out of the war--a position he reversed within five months.

Incorporating the stories of civilians in all countries, both participants in and victims of the war, 1916: A Global History is a major addition to the literature and the Great War by a historian at the height of his powers.

“Richly detailed, and always fascinating . . . A brilliant compendium of everything-you-didn't-know-about World War I, which, for many readers, will be a great deal.” —starred review, Kirkus Reviews

"Jeffery presents a creative and remarkable approach to history; his passion for unearthing previously overshadowed events shines. Historians and history buffs will appreciate the humanistic touch the author portrays so well." —Library Journal

"[S]hifts the focus of the Great War’s pivotal year, 1916, away from the conventional milieu of the Western Front, instead depicting the global dimensions of the metastasizing conflict." —Publishers Weekly

"Keith Jeffery’s book covers all these episodes, but much more: it is a global history, and its purpose is partly to remind us, through the events of this pivotal year, that the Great War was a world war . . . Jeffery is particularly good at deploying anecdote to illustrate and give new insights into aspects of the war." —Literary Review

"Jeffery gives the war a human face by focusing on the experience of individuals . . . An absorbing and multi-layered analysis, one of the most impressive books on the First World War to have appeared in the centenary period." —Times Literary Supplement

"An excellent portrayal of World War I as a truly global war." —Military Officer Magazine

“The author effectively demonstrates the war was truly global in scope and gives the reader a wide vision of the war and what it did to people across the map." —Military Heritage

Keith Jeffery is Professor of British History at Queen's University, Belfast, and a Member of the Royal Irish Academy. In 1998 he was the Lees Knowles Lecturer in Military Science at Trinity College, Cambridge, and in 2003-4, Parnell Fellow in Irish Studies at Magdalene College, Cambridge. He is the author of fourteen previous books. Keith Jeffery lives in Northern Ireland.
Loading...
or
Not Currently Available for Direct Purchase