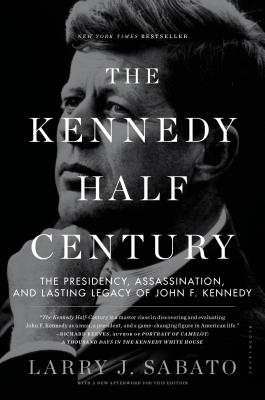 The Presidency, Assassination, and Lasting Legacy of John F. Kennedy

John F. Kennedy died almost half a century ago, yet because of his extraordinary promise and untimely death, his star still resonates strongly. On the anniversary of his assassination, celebrated political scientist and analyst Larry J. Sabato-himself a teenager in the early 1960s and inspired by JFK and his presidency-explores the fascinating and powerful influence he has had over five decades on the media, the general public, and, especially, on each of his nine presidential successors.

The Kennedy Half-Century reexamines JFK's assassination using heretofore unseen information to which he has had unique access, then documents the extraordinary effect the assassination has had on Americans of every modern generation through the most extensive survey ever undertaken on the public's view of a historical figure. The full and fascinating results, gathered by the accomplished pollsters Peter Hart and Geoff Garin, paint a compelling portrait of the country a half-century after the epochal killing. Just as significant, Sabato shows how JFK's presidency has strongly influenced the policies and decisions-often in surprising ways-of every president since.

Among the hundreds of books devoted to JFK, The Kennedy Half-Century stands apart for its rich insight and original perspective. Anyone who reads it will appreciate in new ways the profound impact JFK's short presidency has had on our national psyche.


Praise For The Kennedy Half-Century: The Presidency, Assassination, and Lasting Legacy of John F. Kennedy…

“Larry Sabato has compiled a mountain of research that is sure to be the go-to reference on the assassination for years to come. He seems to have examined any and everything connected to Kennedy's death and brought new insight and understanding to that awful weekend when America lost its innocence.” —Bob Schieffer, CBS News

“Ambitious . . . Sabato is the most prominent political scientist of our age . . . [The Kennedy Half-Century is] a valuable contribution to the literature of the assassination.” —James Rosen, National Review

“The Kennedy Half Century is a Master Class in discovering and evaluating John F. Kennedy as a man,a President and a game-changing figure in American life. The cultural change Kennedy brought to the nation is the real and original contribution Larry J. Sabato brings to the never-ending debates about the 35th President.” —Richard Reeves, author of Portrait of Camelot: A Thousand Days in the Kennedy White House

“In The Kennedy Half-Century, Larry Sabato not only sheds new light on the assassination, but, and more importantly, masterfully explains the enduring legacy of Kennedy and his 1000 days in office.” —John Grisham

Larry J. Sabato is the founder and director of the renowned Center for Politics at the University of Virginia. He has appeared on dozens of national television and radio programs, including 60 Minutes, Today, Hardball, and Nightline. He has coanchored the BBC's coverage of U.S. presidential returns and inaugurations, and has authored or edited more than a dozen books on American politics, including the highly praised A More Perfect Constitution-Why the Constitution Must Be Revised: Ideas to Inspire a New Generation. His other books include Feeding Frenzy, about press coverage of politicians; The Rise of Political Consultants; and Barack Obama and the New America. Sabato runs the acclaimed Crystal Ball website, which has the most comprehensive and accurate record of election analysis in the country. In 2001, the University of Virginia gave him its highest honor, the Thomas Jefferson Award. He lives in Charlottesville, Virginia.
Loading...
or
Not Currently Available for Direct Purchase