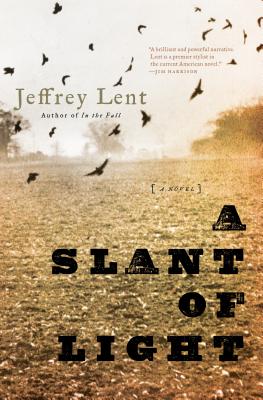 A Slant of Light

At the close of the Civil War, weary veteran Malcolm Hopeton returns to his home in western New York State to find his wife and hired man missing and his farm in disrepair. A double murder ensues, the repercussions of which ripple through a community with spiritual roots in the Second Great Awakening. Hopeton has gone from the horrors of war to those far worse, and arrayed around him are a host of other people struggling to make sense of his crime. Among them is Enoch Stone, the lawyer for the community, whose spiritual dedication is subverted by his lust for power; August Swarthout, whose wife has left earthly time and whose eye is set on eternity; and a boy who must straddle two worlds as he finds his own truth and strength. Always there is love and the memory of love--as haunting as the American Eden that Jeffrey Lent has so exquisitely rendered in this unforgettable novel.

A Slant of Light is a novel of earthly pleasure and deep love, of loss and war, of prophets and followers, of theft and revenge, in an American moment where a seemingly golden age has been shattered. This is Jeffrey Lent on his home ground and at the height of his powers.


Praise For A Slant of Light: A Novel…

“A somber and breathtaking Hardyesque vision of a little-known American past, Lent's newest epic unfolds with the assured timelessness of a classic . . . Many sentences demand rereading for their sheer beauty, and each love story--some tragic, others newly born--has a poignant emotional charge. Lent offers eloquent insight into what makes his characters tick, yet enough unknowns remain to keep the novel unpredictable through the final pages.” —Booklist

“Another keening, moving novel steeped in American history and the rhythms of country life from Lent . . . His prose is as magnificent as ever, capturing the light in a summer sky or the pain in a bereaved heart with equal clarity and beauty . . . More fine work from a writer who stirs both the head and the heart with powerful grace.” —Kirkus Reviews, starred review

“It is a virtue of this lovely book that its pace is unhurried. Lent pays special attention to the matters most important to that particular time and place. For lovers of historical fiction or simply those who appreciate strong writing.” —Library Journal, starred review

“A brilliant and powerful narrative. Lent is a premier stylist in the current American novel.” —Jim Harrison

“Wonderfully entertaining, deeply moving, beautifully written . . . In my estimation, Jeffrey Lent is our most American writer since Mark Twain and one of the two of three best novelists of our time.” —Howard Frank Mosher

“Jeffrey Lent has done for Western New York what Faulkner did for North Mississippi: render a time and landscape with such fidelity that story and place are inextricably bound. A Slant of Light is a marvelous book by one of America's very best novelists.” —Ron Rash

Jeffrey Lent was born in Vermont and grew up there and in western New York State, on dairy farms. He studied literature and psychology at Franconia College in New Hampshire and SUNY Purchase. His first novel, "In the Fall," was a national bestseller and a "New York Times Book Review" Notable Book for 2000. His other novels are "Lost Nation," "A Peculiar Grace," and "After You've Gone." Lent lives with his wife and two daughters in central Vermont.
or
Not Currently Available for Direct Purchase