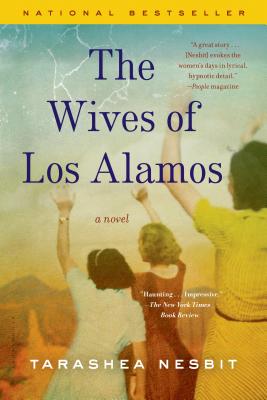 The Wives of Los Alamos

“In 1943, families of mathematicians and scientists, escorted under high security, move to The Hill - Los Alamos, New Mexico. Not knowing where they're going or why, these wives from all over the world cut their ties with friends and relatives to live in isolation, without telephones or uncensored mail. Based on the history of the development of 'The Gadget' - the atomic bomb - this novel reads like a collective diary of hundreds of wives. This unique first-person plural recounting of real events culminates with varied reactions to the use of this powerful weapon on the people of Japan. Nesbit portrays these delicate issues brilliantly!”
— Jane Morck, Third Place Books, Lake Forest Park, WA
View the List

The “haunting . . . impressive” (NYTBR) National Bestseller—imagining the untold human history of the making of the atomic bomb.


They arrived in New Mexico ready for adventure, or at least resigned to it. But hope quickly turned to hardship as they were forced to adapt to a rugged military town where everything was a secret--including what their husbands were doing at the lab. Though they were strangers, they joined together--adapting to a landscape as fierce as it was absorbing, full of the banalities of everyday life and the drama of scientific discovery.

While the bomb was being invented, babies were born, friendships were forged, children grew up, and Los Alamos gradually transformed into a real community: one that was strained by the words they couldn’t say out loud or in letters, and by the freedom they didn’t have. But the end of the war would bring even bigger challenges, as the scientists and their families struggled with the burden of their contribution to the most destructive force in the history of mankind.

The Wives of Los Alamos is a testament to a remarkable group of real-life women and an exploration of a crucial, largely unconsidered aspect of one of the most monumental research projects in modern history.


Praise For The Wives of Los Alamos…

“The story is told by all of the women . . . together in unison as one haunting, communal voice. Impressive . . . . Lulled by the voice, we know that offstage the historic work is being done . . . . Together and alone and each in her separate way, the wives are left to celebrate or lament the wonder or the horror of what their town had done.” —New York Times Book Review

"Haunting . . . fascinating . . . A powerful testament to women’s strength and ability to hold a community together during a disturbing time." - Wall Street Journal

“A great story, and Nesbit boldly uses the first person plural to tell it . . . . She evokes the women's days in lyrical, hypnotic detail.” —People

“I am in awe of this novel. TaraShea Nesbit's brave and brilliant choice of point of view for these women living inside their earth-shattering secret crucible brings home to us in the fullest way possible that our personal story is never just ours. The Wives of Los Alamos will be read and re-read and remembered.” —Gail Godwin, author of Flora

“[A] terrific first novel . . . . A sidelong glance at history that, thanks to its Greek Chorus, becomes rivetingly personal and urgent.” —More magazine

“In this fascinating and artful debut, TaraShea Nesbit gives voice to the women closest to one of gravest and most telling moments in our collective history: the development and testing of the nuclear bomb at Los Alamos. Tender and mundane details of marriage and domesticity quietly collide with the covert and solemn work at hand. With chilling implications and charged, sure-footed prose, this is a novel--and writer--of consequence.” —Paula McLain, author of The Paris Wife

“Hypnotic and filled with elegaic details; Nesbit offers fascinating and disturbing insight into the secret life of the Los Alamos families.” —Madeline Miller, author of The Song of Achilles

“The author's writing--by turns touching, confiding, and matter-of-fact--perfectly captures the commonalities of the hive mind while also emphasizing the little things that make each wife dissimilar from the pack. Engrossing, dense, and believable.” —Publishers Weekly, starred review

“Nesbit brings alive questions of war and power that dog us to this day.” —Booklist, starred review

“This well-researched and fast-paced novel gives a panoramic view of the lives of ordinary women whose husbands worked on the atomic bomb during World War II. Recommended both for its important subject matter and for the author's vivid storytelling.” —Library Journal

“[An] intimate yet artfully distanced narrative . . . . The book is an immersive experience that feels, in hindsight, more like a collection of monologues than a novel using a collective voice. It's an interesting and beautiful achievement.” —Santa Fe New Mexican

TaraShea Nesbit is the author of The Wives of Los Alamos, which was a national bestseller, a finalist for the PEN/Bingham Prize, and a New York Times Editors’ Choice, among other accolades. Her writing has been featured in Granta, The Guardian, Fourth Genre, Salon and elsewhere. She is an associate professor in the creative writing program at Miami University and lives in southwestern Ohio with her family.
Loading...
or support indie stores by buying on