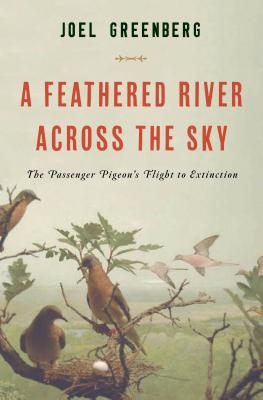 A Feathered River Across the Sky (Hardcover)

The Passenger Pigeon's Flight to Extinction

In the early nineteenth century 25 to 40 percent of North America's birds were passenger pigeons, traveling in flocks so massive as to block out the sun for hours or even days. The down beats of their wings would chill the air beneath and create a thundering roar that would drown out all other sound. Feeding flocks would appear as “a blue wave four or five feet high rolling toward you.”

John James Audubon, impressed by their speed and agility, said a lone passenger pigeon streaking through the forest “passes like a thought.” How prophetic-for although a billion pigeons crossed the skies 80 miles from Toronto in May of 1860, little more than fifty years later passenger pigeons were extinct. The last of the species, Martha, died in captivity at the Cincinnati Zoo on September 1, 1914.

As naturalist Joel Greenberg relates in gripping detail, the pigeons' propensity to nest, roost, and fly together in vast numbers made them vulnerable to unremitting market and recreational hunting. The spread of railroads and telegraph lines created national markets that allowed the birds to be pursued relentlessly. Passenger pigeons inspired awe in the likes of Audubon, Henry David Thoreau, James Fenimore Cooper, and others, but no serious effort was made to protect the species until it was way too late. Greenberg's beautifully written story of the passenger pigeon provides a cautionary tale of what happens when species and natural resources are not harvested sustainably.

Joel Greenberg is a research associate of the Chicago Academy of Sciences Peggy Notebaert Nature Museum and the Field Museum. Author of three books, including A Natural History of the Chicago Region, Greenberg has taught natural history courses for the Morton Arboretum, Brookfield Zoo, and Chicago Botanic Garden. He helped spearhead Project Passenger Pigeon to focus attention on human-caused extinctions. Greenberg lives in Westmont, Illinois. Visit his blog at Birdzilla.com.

Praise For A Feathered River Across the Sky: The Passenger Pigeon's Flight to Extinction…

“The first major work in sixty years about the most famous extinct species since the dodo...equal parts natural history, elegy, and environmental outcry...A painstaking researcher, Greenberg writes with a naturalist's curiosity about the birds...Answering even basic questions about the passenger pigeon requires a sort of forensic ornithology, which gives Feathered River Across the Sky an unexpected poignancy at the very points where it is most nature-nerdy.” —New Yorker

“Joel Greenberg has done prodigious research into the literature of the passenger pigeon and lays much of it out in this book. For that effort, all who care about the living world owe him a debt of gratitude.” —Wall Street Journal

“A brilliant, important, haunting and poignant book, A Feathered River Across the Sky… will forever change the way in which you think of pigeons (all birds, really) and about the natural world. The book describes, in vivid detail, forceful narrative and handsome illustrations, the history of this species and the factors that contributed to its extinction.” —Chicago Tribune

“Joel Greenberg, a Chicago-area naturalist and avid birder, has written a new account of the passenger pigeon's demise, A Feathered River Across the Sky . As Greenberg relates it, in calm, measured prose, it's a story of unremitting, wanton, continental-scale destruction.” —New York Review of Books

“A Feathered River Across the Sky is a parable for our time . . . What a heartbreaking indictment of our species that we treated these animals so thoughtlessly.” —David Suzuki, author of The Sacred Balance

“The human folly depicted here is as deep as the pigeons were numerous . . . Highly recommended.” —Library Journal (starred review)