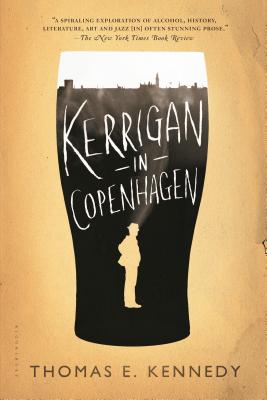 Kerrigan is writing a guide book to his adopted city of Copenhagen. Specifically, a guide to the city's drinking establishments-of which there are more than 1,500. Thus, it is a project potentially without end, and one with a certain amount of drunken numbness built into it. And that's the point: for Kerrigan, an American expat fleeing a terrible betrayal, has plenty he wants to forget. The only problem with his proposed project is his research associate, a voluptuous green-eyed beauty who makes him tremble with forgotten desire.

But his associate also has a past, and as the two of them stroll the cobblestoned streets, studying the art, architecture, parks, and poetry of Copenhagen, they also study each other, circling with uncertainty-to love or not to love? To regret or to renew?

A Joycean celebration of one city's history, culture, and people, Kerrigan in Copenhagen is at once a poignant romance and a raucous journey of discovery, of coming out of darkness to delight again in life.


Praise For Kerrigan in Copenhagen: A Love Story…

“The essay, the guidebook, the love story, the comforting exchange of facts in a bewildering world of emotion--all are to be found in Thomas E. Kennedy's Kerrigan in Copenhagen . . . Coarse language plays off lyrical images and often stunning prose that twirls with the improvisations of the jazz musicians Kerrigan admires.” —The New York Times Book Review

“This up-and-down kind of boozy journey is well worth the time . . . Kennedy's obvious love for Copenhagen drives an exciting work.” —Library Journal

“Once again showcases [Kennedy's] authorial bravado and passion . . . Kennedy proves to be an intellectual and entertaining guide to a remarkable city and to the deepest longings of a broken, aging man.” —Booklist

“In its wisdom and empathy, in its understanding of the supreme importance of love, in its portrait of a strong man and its knowledge of the human soul in all its suffering, this is indeed a profound and exceptional work.” —The Guardian, on In the Company of Angels

“Falling Sideways is the finest novel I have read in many years. Thomas Kennedy is a true discovery, an author of rare intelligence and moral vision. Not least, the book is immensely compelling and beautifully written.” —Alain de Botton, on Falling Sideways

Thomas E. Kennedy's writing has been awarded several prizes, including the National Magazine Award in 2008. He teaches in the M.F.A. program at Fairleigh Dickinson University. Kerrigan in Copenhagen is one of four novels in his acclaimed Copenhagen Quartet; the final, Beneath the Neon Egg, will be published in fall 2014. Born and raised in New York, Kennedy currently lives in Copenhagen with his two children. His websites are www.copenhagenquartet.com and www.thomasekennedy.com.
Loading...
or
Not Currently Available for Direct Purchase