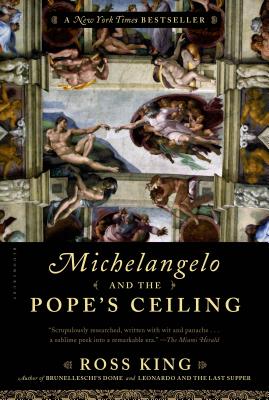 Michelangelo and the Pope's Ceiling

From the acclaimed author of Brunelleschi's Dome and Leonardo and the Last Supper, the riveting story of how Michelangelo, against all odds, created the masterpiece that has ever since adorned the ceiling of the Sistine Chapel.

In 1508, despite strong advice to the contrary, the powerful Pope Julius II commissioned Michelangelo Buonarroti to paint the ceiling of the newly restored Sistine Chapel in Rome. Despite having completed his masterful statue David four years earlier, he had little experience as a painter, even less working in the delicate medium of fresco, and none with challenging curved surfaces such as the Sistine ceiling's vaults. The temperamental Michelangelo was himself reluctant: He stormed away from Rome, incurring Julius's wrath, before he was eventually persuaded to begin.

Michelangelo and the Pope's Ceiling recounts the fascinating story of the four extraordinary years he spent laboring over the twelve thousand square feet of the vast ceiling, while war and the power politics and personal rivalries that abounded in Rome swirled around him. A panorama of illustrious figures intersected during this time-the brilliant young painter Raphael, with whom Michelangelo formed a rivalry; the fiery preacher Girolamo Savonarola and the great Dutch scholar Desiderius Erasmus; a youthful Martin Luther, who made his only trip to Rome at this time and was disgusted by the corruption all around him.

Ross King blends these figures into a magnificent tapestry of day-to-day life on the ingenious Sistine scaffolding and outside in the upheaval of early-sixteenth-century Italy, while also offering uncommon insight into the connection between art and history.


Praise For Michelangelo and the Pope's Ceiling…

“This amazing book transports the listener back to Italy in the early 16th century. King is able to describe the intricacies of fresco painting while also portraying the day-to-day life of that era . . . Highly recommended.” —Library Journal

“A legend-busting, richly detailed account of the four-year making of the Sistine Chapel frescos . . . Readers looking for the lite version of this tale may still want to fire up the VCR and watch Charlton Heston chew the scenery. Those seeking a richer understanding of Renaissance art-making will find this a pleasure.” —Kirkus

“Scrupulously researched, written with panache, Ross King's Michelangelo and the Pope's Ceiling is a sublime peek into a remarkable era.” —The Miami Herald

“Ross King expertly wipes away such smudges from the story of this great painting, only to uncover a truth even more exciting and improbable.” —San Francisco Chronicle