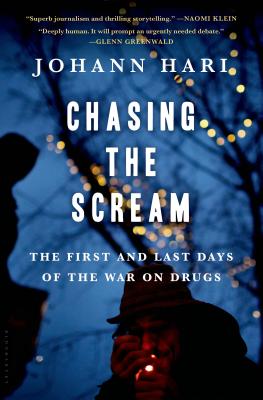 The First and Last Days of the War on Drugs

What if everything you think you know about addiction is wrong? Johann Hari's journey into the heart of the war on drugs led him to ask this question--and to write the book that gave rise to his viral TED talk, viewed more than 62 million times, and inspired the feature film The United States vs. Billie Holiday and the documentary series The Fix.

One of Johann Hari's earliest memories is of trying to wake up one of his relatives and not being able to. As he grew older, he realized he had addiction in his family. Confused, not knowing what to do, he set out and traveled over 30,000 miles over three years to discover what really causes addiction--and what really solves it.


Praise For Chasing the Scream: The First and Last Days of the War on Drugs…

“Amazing and bracing and smart. It's really revolutionary.” —Dan Savage

“One of the world's most important and most enlightening thinkers and social critics.” —Glenn Greenwald, winner of the Pulitzer Prize

“Incredibly insightful and provocative.” —B.J. Novak, creator of THE OFFICE

“A testament to Hari's skill as a writer.” —The New York Times

Johann Hari is the author of Lost Connections. He was twice named Newspaper Journalist of the Year by Amnesty International UK. He has written for the New York Times, the Los Angeles Times, and others, and he is a regular panelist on HBO's Real Time with Bill Maher. His TED talk, “Everything You Think You Know About Addiction Is Wrong,” and the animation based on it have more than twenty million views. Hari lives in London.
Loading...
or
Not Currently Available for Direct Purchase