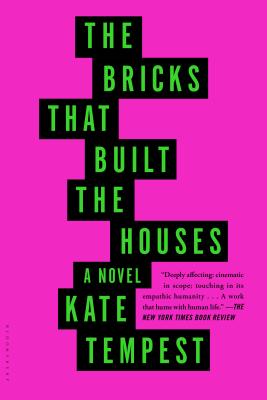 The Bricks that Built the Houses

The debut novel from "dynamic" "wunderkind" Kate Tempest proves her talent to be boundless and unstoppable.*

Becky, Harry, and Leon are leaving London in a fourth-hand Ford with a suitcase full of stolen money, in a mess of tangled loyalties and impulses. But can they truly leave the city that's in their bones?

Kate Tempest's novel reaches back through time--through tensely quiet dining rooms and crassly loud clubs--to the first time Becky and Harry meet. It sprawls through their lives and those they touch--of their families and friends and faces on the street--revealing intimacies and the moments that make them. And it captures the contemporary struggle of urban life, of young people seeking jobs or juggling jobs, harboring ambitions and making compromises.

The Bricks that Built the Houses is an unexpected love story. It's about being young, but being part of something old. It's about how we become ourselves, and how we effect our futures. Rich in character and restless in perspective, driven by ethics and empathy, it asks--and seeks to answer--how best to live with and love one another.


Praise For The Bricks that Built the Houses…

"Ms. Tempest has an ability to write about big, metaphysical subjects in the most vernacular language, while conjuring a sense of contemporary English life with a handful of chiseled lines . . . She demonstrates a knack . . . for being able to shuttle easily back and forth between the mundane and the mythic, the banal and philosophical." —Michiko Kakutani, The New York Times

"Citing both the poet William Blake and the rapper RZA among her influences, she is a powerful mix of innocence and experience with a growing, and fervent, following . . . Ms. Tempest's work jumps boundaries." —Rachel Donadio, The New York Times

"[A] remarkable, powerful collection . . . These are acute and insightful poems that lodge in the ear and sear themselves on the vision." —Best Poetry Books of 2014, The Guardian on HOLD YOUR OWN

"A virtuoso . . . Tempest threads a needle between Pete Rock and Homer . . . [She is] reporting live from the Colosseum, reminding us that those who forget history are doomed to repeat it." —Barnes and Noble Review

Kate Tempest grew up in south-east London, where she still lives. Her first poetry collection Everything Speaks in its Own Way was released on her own Zingaro imprint. Her epic poem, Brand New Ancients – a modern-day myth set in south London – won the Ted Hughes Prize in 2013, making her the first-ever recipient under 40. Her extensive international tour of Brand New Ancients sold out everywhere and gained a five star review in the New York Times. Her plays include GlassHouse, Wasted and Hopelessly Devoted. She released an album, Balance, with Sound of Rum in 2011 and her debut solo album, Everybody Down, a narrative-led hip hop record based on The Bricks That Built The Houses, was released on Big Dada records in 2014 to wide critical acclaim. Kate Tempest's second poetry collection, Hold Your Own, will be published in October 2014.
Loading...
or
Not Currently Available for Direct Purchase