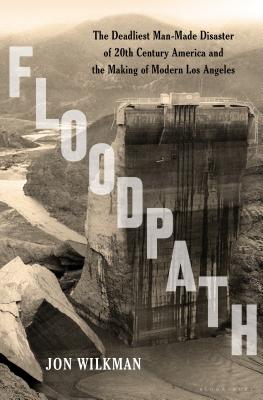 Just before midnight on March 12, 1928, the St. Francis Dam, a twenty-story-high concrete structure just fifty miles north of Los Angeles, suddenly collapsed, releasing a devastating flood that roared fifty-four miles to the Pacific Ocean, destroying everything in its path. It was a horrific catastrophe, yet one which today is virtually forgotten.

With research gathered over more than two decades, award-winning writer and filmmaker Jon Wilkman revisits the deluge that claimed nearly five hundred lives. A key figure is William Mulholland, the self-taught engineer who created an unprecedented water system, allowing Los Angeles to become America's second-largest city, and who was also responsible for the design and construction of the St. Francis Dam.

Driven by eyewitness accounts and combining urban history with a life-and-death drama and a technological detective story, Floodpath grippingly reanimates the reality behind L.A. noir fictions such as the classic film Chinatown. In an era of climate change, increasing demand on water resources, and a neglected American infrastructure, the tragedy of the St. Francis Dam has never been more relevant.


Praise For Floodpath: The Deadliest Man-Made Disaster of 20th-Century America and the Making of Modern Los Angeles…

"Taking the lives of more than four hundred Californians, the St. Francis Dam disaster of 1928 constitutes a cautionary coda in the creation of metropolitan Los Angeles through water engineering. In this future classic of California historiography, veteran filmmaker and historian Jon Wilkman vividly presents the full story of the technical and human failures involved. Even more, Wilkman probes how this catastrophe -- after evasion and denial -- guided Los Angeles to new maturity." —Kevin Starr, University Professor and professor of history and of policy, planning, and development at the University of Southern California

"Jon Wilkman retells the harrowing story of the St. Francis Dam break of 1928 with ardent imagination and scholarly insight. Every page is riveting. The amount of primary research Wilkman undertook is staggering. It’s impossible to understand California in the twentieth century without reading this landmark book." —Douglas Brinkley, professor of history at Rice University and author of The Great Deluge

"The St. Francis Dam collapse ranks second only to the San Francisco earthquake in the annals of California disasters, and first in the nation as a disaster of human engineering. Jon Wilkman brilliantly and dramatically captures the background and scale of the tragedy. His book is essential reading for anyone interested in the human consequences of the unrestrained quest for water and electricity in twentieth-century America." —Michael Hiltzik, Pulitzer Prize–winning journalist and author of Colossus

"A well-researched account of a little-remembered California tragedy . . . Wilkman tells the dramatic story in the context of the rapidly growing city." —Kirkus Reviews

"Wilkman gracefully combines engineering explanations and a who’s who of turn-of-the-century Los Angeles elites with a riveting account of what is called the deadliest man-made disaster in America during the twentieth century . . . While the massive disaster may have been largely forgotten, its foundation in both hubris and opportunism remains relevant today." —Booklist

"Popular knowledge of early Los Angeles’s struggle for water owes much to the film Chinatown, but documentary filmmaker and writer Wilkman shows that the real story of L.A.’s water is as fascinating -- and devastating -- as the fictionalized version . . . More than just the story of one of the greatest tragedies in the 20th century, Wilkman’s book is also a commentary on developing safe technologies in the face of climate change." —Publishers Weekly

"Wilkman demonstrates a balanced perspective on Mulholland’s lifetime of labor, acknowledging both the good and the bad that the man’s actions wrought. Moreover, the author ties the events at the St. Francis Dam to the contemporary American experience -- with a high demand for water in a severe drought, combined with the aging and failing infrastructure of dams, waterworks, and energy grids, Wilkman convincingly argues that the United States is primed for another such disaster." —Library Journal

"The St. Francis Dam failure was one of the pivotal events in U.S. history that forced policymakers to consider how public safety and environmental impacts would fit into national growth and the insatiable need for water. Mr. Wilkman reminds us in compelling detail about the importance of learning from the past." —Lori C. Spragens, Executive Director, Association of State Dam Safety Officials

"Wilkman’s fine book dramatically explores the little-known story of a major American disaster. It is a fascinating technological detective story and a compelling human drama, including the impact of a powerful engineer’s overconfidence and the loss of hundreds of innocent lives." —Mark E. Baker, P.E., Dam Safety Officer, National Park Service

Jon Wilkman is an award-winning documentary filmmaker. His television series Moguls and Movie Stars: A History of Hollywood was named one of the year's top ten programs by the New York Daily News and the Wall Street Journal, and nominated for three Emmy Awards, including writing. Wilkman also is the author, with his late wife, Nancy, of two books about Los Angeles. He is currently at work on a documentary on the St. Francis Dam disaster.
Loading...
or
Not Currently Available for Direct Purchase