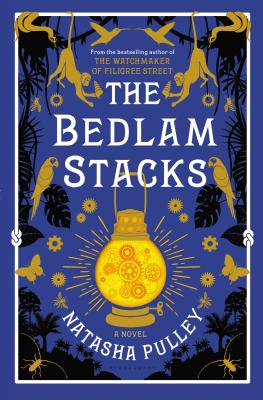 
Praise For The Bedlam Stacks…

Natasha Pulley studied English Literature at Oxford University. After stints working at Waterstones as a bookseller, then at Cambridge University Press as a publishing assistant in the astronomy and maths departments, she did the Creative Writing MA at UEA. She later studied in Tokyo, where she lived on a scholarship from the Daiwa Anglo-Japanese Foundation. She was chosen to be a Writer in Residence at Gladstone's Library and is now associate lecturer at Bath Spa University and panel tutor at the Cambridge University Institute of Continuing Education. Her first novel, The Watchmaker of Filigree Street, was an international bestseller, won a Betty Trask Award and was shortlisted for the Authors' Club Best First Novel Award. The Bedlam Stacks is her second novel. She lives in Bath.

1. The novel is written in first person. How does this point of view affect your reading experience? How are the setting, time period, and cultural mindsets made clear through this choice of POV?

2. Consider the structure of the novel. Why is it written in parts? What do the delineations do to move the novel along? Which themes are established in each part?

3. Does The Bedlam Stacks follow in the tradition of the travel narrative genre? Why or why not? Is it effective to write the novel in this genre? What does it add to the story? What inherent pitfalls exist in the genre?

4. How does Pulley construct settings and what roles do those settings play in the novel? How does Merrick develop as a character depending on where he is across the globe? What new insights about himself does he encounter in each place? Does Merrick have a home?

5. Pulley employs flashbacks in portions of the novel. How do these flashbacks help flesh out the characters and their backstories? How are they important to the linear events happening in Peru? Were they helpful to you as a reader?

6. Find some passages that show the surreal nature of The Bedlam Stacks’ world. How do these moments operate in the greater text? How do they create liminal spaces of reality and magic?