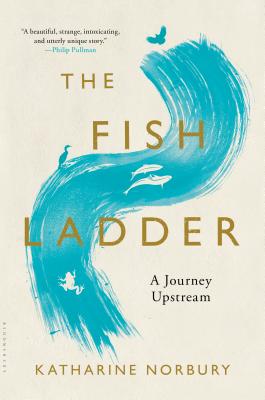 Katharine Norbury was abandoned as a baby in a Liverpool convent. Raised by a loving adoptive family, she grew into a wanderer, drawn by the landscape of the British countryside.

One summer, following the miscarriage of a much-longed-for child, Katharine sets out--accompanied by her nine-year-old daughter, Evie--with the idea of following a river from the sea to its source. The luminously observed landscape grounds the walkers, providing both a constant and a context to their expeditions. But what begins as a diversion from grief evolves into a journey to the source of life itself: a life threatening illness forces Katharine to seek a genetic medical history, and this new and unexpected path delivers her to the door of the woman who abandoned her all those years ago.

Combining travelogue, memoir, exquisite nature writing, and fragments of poems with tales from Celtic mythology, The Fish Ladder has a rare emotional resonance. It is a portrait of motherhood, of a literary marriage, a hymn to the adoptive family, but perhaps most of all it is an exploration of the extraordinary majesty of the natural world. Imbued with a keen and joyful intelligence, this original and life-affirming book is set to become a classic of its genre.

Katharine Norbury trained as a film editor with the BBC and has worked extensively in film and television drama. She is a graduate of the Creative Writing MA programme at UEA and a doctoral candidate at Goldsmiths. She lives in London with her family. The Fish Ladder is her first book.


Praise For The Fish Ladder: A Journey Upstream…

"Extraordinary . . . Often unbearably rich in its depiction of grief, physicality and a search for family, the book is framed by actual, mythical and metaphorical journeys to the source of water." —The Guardian, "Readers' Books of the Year 2015"

“Norbury stirs the imagination with descriptive passages . . . a beautifully written book about a journey through wild places in the landscape and the heart.” —starred review, Kirkus Reviews

“Engaging . . . There are many moments of extraordinary synergy in this limpid, patiently meandering narrative . . . extraordinary and moving.” —Publishers Weekly

“Eccentric and luminous, this is a great addition to the growing genre of nature ramble memoir.” —The Guardian

“Deeply affecting, atmospheric and sensuous, The Fish Ladder is a beautifully written meditation of what it is to be alone, of yearning for connection, and of the consolations of nature.” —Polly Samson, author of Perfect Lives

“[The Fish Ladder] makes emotional and profound ventures into landscape, the importance of place and the very real connections between physical and interior voyages.” —Shelf Awareness