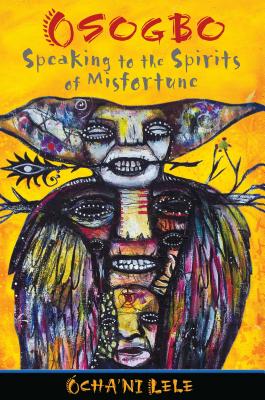 Speaking to the Spirits of Misfortune

By understanding osogbo, the spirits of misfortune, we can better overcome them and return to health and balance in our lives

• Shows that we can overcome osogbo through ebó, sacrifice, and hard work as prescribed by consulting the orishas through the casting of the diloggún

Beginning with the story of his goddaughter's battle with stage IV cancer, Lucumi priest Ócha'ni Lele explains the role of osogbo, or misfortune, in our lives. While everyone seeks blessings in life, undeserved blessings make us weak and lazy. It is tragedy that encourages us to grow and persevere. Exploring the Lucumí beliefs regarding osogbo, he shows that the Lucumí faith is neither fatalistic nor defeatist but healing and life affirming. He shares more than 40 patakís--stories stemming from the ancient Yoruba of West Africa--about the different spirits of osogbo, who like the orishas once walked the earth in human bodies. He explains the place of these spirits within the 256 odu of the diloggún, the divination system used in Santería to receive guidance from the orishas.

Lele shows that the spirits of osogbo are not only concepts but also real deities and that we can, if we understand their nature, fight them through ebó, sacrifice, and hard work. He reveals how the osogbos see themselves as entities of misfortune who stand against life and all that is good in the world, but in truth it is misfortune that strengthens us, misfortune that motivates us, and misfortune that brings great evolution to the world. As the author shows, “Without bitterness, one could not know sweetness.” Likewise, without misfortune in our lives, we would never know blessings or what it means to be blessed.

Praise For Osogbo: Speaking to the Spirits of Misfortune…

“Finally we have an author willing to serve up the spiritual beauty of ancient Africa at the table of the modern world. Clearly, there is a legacy beginning to unfold.”
— Iyanla Vanzant, founder of Inner Visions Spiritual Institute, host of the TV show Iyanla, Fix My Lif

“Once again, Ócha'ni Lele has demonstrated his masterful grasp of an often confusing subject with clarity, compassion and wisdom; a must-read volume sure to be eagerly studied by newcomers and elders alike for generations to come. As Lydia Cabrera is to Palo Mayombe, Ócha'ni Lele is to Lucumi.”
— Candelo Kimbisa, host of Candelos Corner, Blog Talk Radio

“I loved Osogbo. I don’t say that often, or lightly; to earn such praise a book has to open up a whole new world for me, to change my point of view, to teach me something I can use daily. This is such a book. When misfortune visits your house and you wonder why, you may find enlightenment and comfort in the pages of his book. You will, if nothing else, find a great teacher.”
— Susan Starr, Spiral Nature, September 2014

Author of The Secrets of Afro-Cuban Divination, Ócha'ni Lele was immersed in the underground culture of Orisha worship since 1989. By 1995 he had received several initiations in both Santeria and the Congo faith Palo Mayombe and in 2000 he made Ocha and was crowned a Santeria priest. He lived in Florida.
Loading...
or support indie stores by buying on