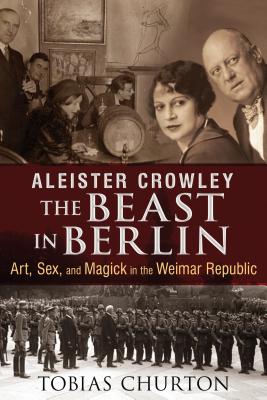 The Beast in Berlin: Art, Sex, and Magick in the Weimar Republic

• Examines Crowley’s focus on his art, his work as a spy for British Intelligence, his colorful love life and sex magick exploits, and his contacts with magical orders

Gnostic poet, painter, writer, and magician Aleister Crowley arrived in Berlin on April 18, 1930. As prophet of his syncretic religion “Thelema,” he wanted to be among the leaders of art and thought, and Berlin, the liberated future-gazing metropolis, wanted him. There he would live, until his hurried departure on June 22, 1932, as Hitler was rapidly rising to power and the black curtain of intolerance came down upon the city.

Known to his friends affectionately as “The Beast,” Crowley saw the closing lights of Berlin’s artistic renaissance of the Weimar period when Berlin played host to many of the world’s most outstanding artists, writers, filmmakers, performers, composers, architects, philosophers, and scientists, including Albert Einstein, Bertolt Brecht, Ethel Mannin, Otto Dix, Aldous Huxley, Jean Ross, Christopher Isherwood, and many other luminaries of a glittering world soon to be trampled into the mud by the global bloodbath of World War II.

Drawing on previously unpublished letters and diary material by Crowley, Tobias Churton examines Crowley’s years in Berlin and his intense focus on his art, his work as a spy for British Intelligence, his colorful love life and sex magick exploits, and his contacts with German Theosophy, Freemasonry, and magical orders. He recounts the fates of Crowley’s colleagues under the Nazis as well as what happened to Crowley’s lost art exhibition--six crates of paintings left behind in Germany as the Gestapo was closing in. Revealing the real Crowley long hidden from the historical record, Churton presents “the Beast” anew in all his ambiguous and, for some, terrifying glory, at a blazing, seminal moment in the history of the world.

Praise For Aleister Crowley: The Beast in Berlin: Art, Sex, and Magick in the Weimar Republic…

“An invaluable in-depth history--magnificently illustrated in full color--that sheds light on one of the most important periods in both 20th century Europe and the life of the Magus of the Aeon, Aleister Crowley. His two-year stay in volatile, bohemian, and urbane Berlin during the final years of the Weimar Republic and first years of the Great Depression has hitherto been largely undocumented. This full-length treatment of Crowley as artist (in Churton’s words, “the only Magus in history with a name worthy of the annals of Art”) is cast against the last days of Germany’s Versailles Treaty era and the apocalyptic rise of Adolph Hitler and his “merely brutal men.” The author well captures the cultural spirit and intoxicating New Age currents in which Crowley moved. For specialists, he provides a uniquely intimate view of Crowley’s succession to the Headship of O.T.O. during the Weida Conference of 1925; some intelligent observations on sexual magick; and extensive extracts from Crowley’s voluminous correspondence--allowing the reader a “Beast’s-eye-view” of his personal life, proselytizing efforts, business activities, and thorough contempt for Nazism. Highly recommended.”
— James Wasserman, author of The Mystery Traditions: Secret Symbols and Sacred Art and In the Center o

“As soon as I opened this book I knew I was in for an exceptional treat, and I was right. This is Churton at his best. His book focuses, with some broader contextualization, on Crowley’s intermittent sojourns in Berlin between 1930 and 1932, which climaxed in a sensational exhibition of his paintings in October 1931. We follow Crowley as he strolls through the city, dressed in a knickerbocker suit, proclaiming his gospel of Thelema, exploring Berlin’s extensive demi-monde, playing chess, painting, writing, fornicating, spying for British intelligence, and mingling with a remarkable constellation of artists, writers, philosophers, and occultists. One of his friends at the time was Christopher Isherwood, who fictionalized his own Berlin experience in the novel that later became the musical Cabaret. Churton, in his vivid, witty style, superbly captures the atmosphere of the city during that feverish, decadent, but immensely vibrant and creative era, which ended abruptly with the catastrophe of 1933. Move over, Isherwood. From now on we should be talking about ‘Crowley’s Berlin.’”
— Christopher McIntosh, Ph.D., author and Honorary University Fellow and Western Esotericism lecturer

“Yet again, Tobias Churton shows a unique ability to combine an approachable writing style with scholarly research and the result is an authoritative book on Crowley, the artist, a person who deserves to be re-assessed rather than be relegated to the dustbin of history.”
— Sanda Miller, Ph.D., research fellow, History of Art, Southampton Solent University

“Tobias Churton has done it again! Exhaustively exploring the Beast’s sojourn through the kaleidoscope of cultural tumult that was the final years of the Weimar Republic, Churton’s astute eye and clarity of composition provide the lucky reader with a riveting view into what was a hotbed of sex, art, and politics. Churton’s gifts at conjuring a fascinating and profound study from myriad sources are in evidence as usual, painting an engaging portrait of the Magus of the Aeon and the milieu in which he moved.”
— Frater Puck, Ordo Templi Orientis-U.S. Grand Lodge and host of Thelema NOW!

“Whether Quantum Magus, Berlin Artist, lover, or spy, Churton brings Crowley to life like no other biographer. He truly gets him . . . You don’t so much read this book as you live it, the noisome Beast in Berlin, our own beast within. Churton brings us the first serious and comprehensive study of Crowley’s remarkable Berlin period.”
— Stephen J. King (Shiva Xâ °), Grand Master, Ordo Templi Orientis

“A remarkable account of Baphomet in Berlin, full of fascinating new information on Crowley’s decadence and discipline as a Berlin Boy as Germany spiraled down into its apocalyptic picnic. Tobias Churton has uncovered much that is new and marvelously expands on and clarifies that which was already known. A wonderful evocation of the darkness becoming visible--a truly Manichæan history.”
— David Tibet, founder of Current 93

“Aleister Crowley: The Beast in Berlin is magic! Churton opens box after box of secrets in a dazzling display of research, erudition, and insight. Aleister Crowley is revealed in all his jaw-dropping splendor, plus warts. A genius forced to suffer fools, able to transcend misfortune, an adventurer in the worlds of art and war. His wisdom is both light and deep; the book is thrilling.”
— Vanilla Beer, artist

“It’s hard not to empathize with Crowley as portrayed in the book—a man possessed of more radical intelligence than most before or after, who probably came off a bit autistic in his time, dealing with constant trouble, power games and consistently overestimating both people’s intelligence and integrity. Though he stands so far above both the Theosophical movement and its heirs in the New Age and Neopagan Revival, much of Crowley’s life was overshadowed by his troubles with money, students, the press and local governments—all of which consistently seem to thwart him in his latter years. Despite all that, he left a body of work, and philosophy, of unparalleled clarity and value. But in Aleister Crowley: The Beast in Berlin—Art, Sex and Magick in the Weimer Republic, we get a better look at Crowley not as a symbol, but as a man of his time. Highly recommended.”
— Ultraculture, Jason Jouv, August, 2014

“The Beast in Berlin is an inspiring and engaging narrative of Aleister Crowley in the turbulent and cathartic years of Berlin in the early 1930s. Meticulously researched and filled with just enough biographical fact, informed speculation, dirty gossip and esoteric philosophy to keep you riveted from first word to last, Crowleyan scholar Tobias Churton has spun an entertaining and eye-opening tale documenting the reckless life of outsider artists living on the edge in a city on the brink of Apocalypse. Along the way we see the Beast play chess with Fernando Pessoa, correspond with Aldous Huxley, night crawl with Christopher Isherwood, spy, paint, incant, exorcise and interact artistically and sexually with a wide range of colorful, bizarre and nondescript characters—the absolute dregs of Berlin society. Perhaps the most readable and interesting book to catch the true spirit of Frater Perdurabo.”
— John Zorn, Musician, July 2014

“…This book offers a fascinating insight into a little known part of the Great Beast’s colourful and extraordinary life. Recommended.”
— The Cauldron, December 2014

“Weimar and what happens after become, in Churton’s hands, the darkness against which to highlight Crowley with stunning chiaroscuro.”
— Rain Taxi, Spencer Dew, April 2015

Tobias Churton is Britain’s leading scholar of Western Esotericism, a world authority on Gnosticism, Hermeticism, and Rosicrucianism. He is a filmmaker and the founding editor of the magazine Freemasonry Today. An Honorary Fellow of Exeter University, where he is faculty lecturer in Rosicrucianism and Freemasonry, he holds a master’s degree in Theology from Brasenose College, Oxford, and created the award-winning documentary series and accompanying book The Gnostics, as well as several other films on Christian doctrine, mysticism, and magical folklore. The author of many books, including Gnostic Philosophy, The Invisible History of the Rosicrucians, and Aleister Crowley: The Beast in Berlin, he lives in England.
Loading...
or support indie stores by buying on