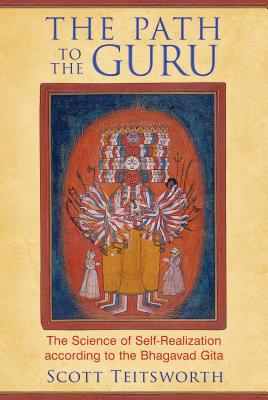 The Path to the Guru (Paperback)

The Science of Self-Realization according to the Bhagavad Gita

• Shows how the Gita prepares you to work with a guru, advocating authenticity and skepticism rather than blind devotion and obedience

Drawing on his more than 40 years of in-depth study of Indian Philosophy under the tutelage of his guru, Nitya Chaitanya Yati, author Scott Teitsworth explores the scientific approach to self-transformation and spiritual enlightenment encoded in Krishna’s advice to Arjuna in the Bhagavad Gita. Providing a verse-by-verse examination of the first two chapters, he reveals the Gita’s lessons to prepare the seeker to meet and successfully work with a guru--whether an outside teacher or the intuitive knowledge that arises from overcoming the psyche’s learned limitations.

The author shows that the Gita does not advocate blind devotion to a guru or god but rather personal development, victory over your fears, and liberation of the psyche. He demonstrates how Krishna’s advice provides tools to guide us out of our fear-based experiences to reconnect with the suppressed parts of our inner being. He explains how Arjuna’s doubts and confusions represent the plight of every person--we are born free but gradually become bogged down by the demands of our society, continuously dependent on outside authority for answers and disconnected from our true inner nature. He reveals how Krishna’s advice offers guidance for dealing with life’s conflicts, which societal limitations to reject, and how to see through the polarizing notion of good versus evil to form a balanced state of mind superior to both.

Restoring the fearless vision of the ancient rishis, who, like today’s scientists, prized skepticism as an important technique for accessing truth, Teitsworth reveals the Gita as a guide to an authentic guru-disciple relationship as well as to constructing a life of significance, freedom, and true sovereign adulthood.

Scott Teitsworth is a lifelong student of Indian philosophy and modern science under the tutelage of Nitya Chaitanya Yati, himself a disciple of Nataraja Guru. An editor of books written by these gurus, he and his wife host the Portland branch of the Narayana Gurukula, where they have taught classes on the Bhagavad Gita and Indian philosophy since the 1970s. He lives in Portland, Oregon.

Praise For The Path to the Guru: The Science of Self-Realization according to the Bhagavad Gita…

“The Bhagavad Gita is a preeminent text of spiritual liberation, whose mystical import has seldom been addressed in print. Teitsworth reveals its hidden significance in an elucidation that stands head and shoulders above the rest. If you have ever wondered what yoga is really all about, this is the place to look.”
— Dennis Dalton, author of Mahatma Gandhi: Nonviolent Power in Action and professor emeritus at Barnar

“I am delighted with Scott Teitsworth’s The Path to the Guru. It is an exceptional approach to concentrate on just two chapters! Scott’s interpretation is well suited for the modern day. I would highly recommend this book to spiritual seekers of all faiths.”
— Bill Robinson, Ph.D., composer and lecturer of physics at North Carolina State University

“The Bhagavad Gita is a multifaceted jewel shedding multicolored lights. The author has caught quite a few of these lights and thus has shed more light on this ancient classic that will prove to be of immense help to all lovers of the book.”
— Vanamali Mataji, founder and president of Vanamali Gita Yoga Ashram Trust and author of seven books

“Scott Teitsworth’s relevant and in-depth analysis of its first two sections of the Bhagavad Gita skillfully balances a perspective that is both accessible and true to the heart of the original text.”
— Jason Bowman, vinyasa yoga teacher
or
Not Currently Available for Direct Purchase
Copyright © 2020 American Booksellers Association