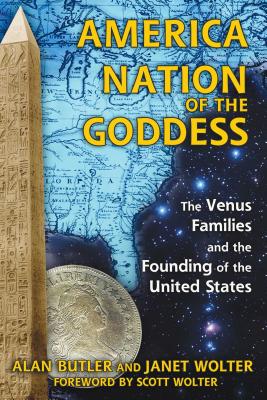 Nation of the Goddess: The Venus Families and the Founding of the United States

• Exposes the esoteric influences behind the National Grange Order of Husbandry

• Examines the sacred design and hidden purpose of the Washington Monument

In America: Nation of the Goddess, Alan Butler and Janet Wolter reveal how a secret cabal of influential “Venus” families with a lineage tracing back to the Eleusinian Mysteries has shaped the history of the United States since its founding. The evidence for such incredible assertions comes from American institutions such as the National Grange Order of Husbandry and from the man-made landscape of the United States where massive structures and whole cities conform to an agenda designed to elevate the feminine within religion and society.

The authors explain how the Venus families, working through the Freemasons and later the Grange, planned the American Revolution and the creation of the United States. It was this group who set the stage for the Founding Fathers to create Washington, D.C., according to the principles of sacred geometry, with an eye toward establishing the New Jerusalem. The authors explore the sacred design of the Washington Monument, revealing its occult purpose and connections to the heavens. They reveal how the obelisks in New York City depict the stars of Orion’s Belt just like the Giza pyramids and how the site of one of them, St. Paul’s Chapel, is the American counterpart to Rosslyn Chapel in Scotland. Exposing the strong esoteric influences behind the establishment of the Grange in the United States, they connect this apparently conservative order of farmers to the Venus families and trace its lineage back to the Cisterians, who were a major voice in the promotion of the Crusades and the establishment of the Knights Templar.

The authors conclude with the startling revelation that nearly every city in America has a temple to the Goddess hidden in plain sight--their baseball diamonds--exposing the extent to which the Venus families are still at work behind the scenes.

Alan Butler is a writer, researcher, and recognized expert in ancient cosmology and astronomy with many books to his credit, including Hiram Key Revisited, Civilization One, and City of the Goddess. He has appeared on Ancient Aliens, The Mystery of History, and America Unearthed. He lives in Yorkshire, England.

Janet Wolter is a writer and historical investigator. Married to Scott F. Wolter, the host of H2’s America Unearthed, she lives outside of Minneapolis, Minnesota.

Scott F. Wolter is the host of H2’s America Unearthed.

Praise For America: Nation of the Goddess: The Venus Families and the Founding of the United States…

“. . . A scholarly yet fun to read book packed with revelations about America’s greatest secrets. Readers will never be able to look at the nation’s capital or New York City the same way again.”
— Steven Sora, author of Secret Societies of America’s Elite and The Lost Treasure of the Knight

“The authors have compiled a wealth of esoteric lore and fascinating facts affirming connections between ancient henges, the Knights of the Temple Brotherhood, modern Freemasonry, and the birth of the United States. Applying principles of sacred geometry, surprising associations with the Great Goddess are confirmed in actual measurements and sun/shadow relationships of obelisks in New York and Washington, D.C., the capital city.”
— Margaret Starbird, Roman Catholic scholar and bestselling author of The Woman with the Alabaster Jar

“America: Nation of the Goddess brings to light some of the hidden gems of Freemasonry, including the origins of the Grange and what is the true heart and soul of the Craft. The amazing shadow play of the Washington Monument will forever change the National Mall experience for all who read this book.”
— Scott F. Wolter, host of H2’s America Unearthed and author of The Hooked X

“From the deepest shadows of the medieval Knights Templar to the shining light of the National Grange and Freemasonry, Alan Butler and Janet Wolter lift the many veils of the Venus Families and reveal their central involvement in the founding of America. Gently unwinding the double helix of the Holy Bloodline, they display the eternal Goddess in all of her glorious splendor. Within the pages of America: Nation of the Goddess, the mark of the Goddess is not only shown to be on the very foundations of Washington, D.C., and New York City but also on the entire free nation of America!”
— William F. Mann, author of The Knights Templar in the New World, The Templar Meridians, and Templar

“The innovative ideas in America: Nation of the Goddess will stimulate not only experienced researchers but any reader seeking new and exciting theories in the field. If you are interested in secret societies, the Templars, Francis Bacon, the secret history of Washington, D.C., Masonic symbols, and other fascinating mysteries, this is the book is for you. America: Nation of the Goddess has a wealth of information. Highly recommended.”
— John DeSalvo, Ph.D., director of the Great Pyramid of Giza Research Association and author of The Lo

“What does a Cistercian monastery have to do with Grange Halls in America? How did the Freemasons and the Knights Templar get involved? What is the Megalithic Yard and how did it affect the design of our nation’s capitol? Are Demeter’s Elysinian Mysteries alive and well in Washington, D.C.? Is there really an Egyptian Temple in New York City, hidden in plain sight? These are the questions that these authors tackle and the answers are astounding. Both of them have well-tested reputations in the field of historical research. They have documented evidence that a group of people (the Venus Families) have influenced the birth and development of the United States of America since its very beginnings. They have spent decades ferreting out the real-world evidence for that lineage, and now they are taking readers on a real-world adventure in search of esoteric mysteries. The mysteries, according to these authors, turn out not to be all that esoteric. The evidence is documented in ancient texts, in archeological sites, and in extant buildings right here in the USA. Even your most conservative customers are realizing that a powerful change is occurring in our world now. Many people believe that the energies of the Goddess have been surfacing during these recent turbulent times. That’s exactly what these authors believe. Dense with academic information, this 350-page book is amazingly readable and engaging. It has something for everybody. You might be surprised by how many of your customers are interested.”
— Retailing Insight, Anna Jedrziewski
or support indie stores by buying on
Copyright © 2020 American Booksellers Association