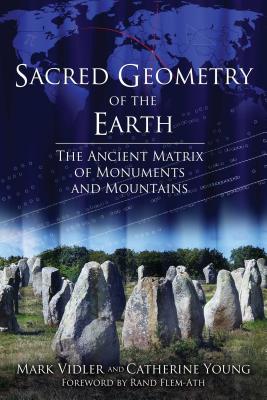 Sacred Geometry of the Earth (Paperback)

The Ancient Matrix of Monuments and Mountains

• Reveals how ancient monuments were built to reflect and enhance the Earth’s design, often connecting sites around the world

From continent to continent across the globe, Mark Vidler and Catherine Young reveal that order is everywhere on Earth. On remote islands, soaring summits, and level deltas, they unveil natural topographic patterns related to pi, the golden ratio, and right-triangle geometry. And as the planet’s design emerges, it becomes clear that this hidden order in nature decided the location of ancient monuments the world over.

Through detailed maps, Vidler and Young show how the locations of megalithic monuments reflect and enhance a natural pattern on the Earth that connects its major features. The rows of standing stones at Carnac in France, for example, point to the summits of Mount Everest and K2, and Angkor Wat in Cambodia is on a straight line joining Mount Kilimanjaro in Africa and the tip of Cape Comorin in India. The authors examine the geography of many islands and each continent, including Antarctica, to show how the highest peak on each landmass falls on a line connecting coastal extremes. They reveal how circles of standing stones and man-made mounds mark intersections of these lines. They explore the connection between the Nazca lines in Peru and the Amazon, Nile, and Ganges deltas and explain how the locations of the Giza pyramids, Stonehenge, and Machu Picchu are integrated into the natural design on Earth.

As they uncover geometric patterns on the Earth line by line, point by point, the authors reveal how the world’s ancient monuments represent a form of transglobal communication that far predates the written word.

Mark Vidler is an artist, designer, and carpenter who studied at the Hornsey School of Art, the Polytechnic of Central London, and Bath Academy. The author of The Star Mirror, he has studied early history and the stellar alignments of ancient monuments since 1994. He lives in Bradford-on-Avon, Wiltshire, U.K.

Catherine Young spent her childhood in Africa, Italy, and Austria before graduating from Bristol University in England. She teaches English at a school in Wiltshire and lives in Bradford-on-Avon, Wiltshire, U.K.

Rand Flem-Ath is a librarian and coauthor of The Atlantis Blueprint. He has appeared on the History Channel, the Discovery Channel, NBC, CBC, and the BBC as well as on numerous radio shows. He lives on Vancouver Island in British Columbia.

Praise For Sacred Geometry of the Earth: The Ancient Matrix of Monuments and Mountains…

“The intriguing theories of Catherine Young and Mark Vidler concerning the coincidence of prominent landscape features shown in their juxtapositions to express mathematical ratios in terms of nautical miles should not be dismissed.”
— John Neal, author of Measuring the Megaliths and The Structure of Metrology

“An astonishing piece of work and utterly compelling.”
— Allan Brown, illustrator and contributor to How the World Is Made

“Authors Mark Vidler and Catherine Young, in a book loaded with photographs and illustrations, detail how ancient and distant man-made sites and mountain peaks across our planet's landscape curiously interconnect across the vast globe into various geometric patterns. From the Giza pyramids, Stonehenge, Machu Pichu, the standing stones of Carnac, Angkor Wat, and numerous other significant locations, the authors illustrate and explain the curious geographical correlations and search for meanings and explanations to try and explain these widespread patterns.”
— AP Magazine, Brent Raynes, March 2016
or
Buy Here
Copyright © 2020 American Booksellers Association