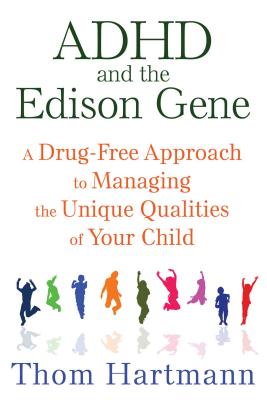 ADHD and the Edison Gene (Paperback)

• Shows how artists, inventors, and innovators carry the gene necessary for the future survival of humanity

In ADHD and the Edison Gene, Thom Hartmann shows that the creativity, impulsiveness, risk taking, distractibility, and novelty seeking that are characteristic of Attention Deficit Hyperactivity Disorder (ADHD) are not signs of a disorder at all but instead are components of a highly adaptive skill set utilized by our hunting and gathering ancestors. These characteristics have been critical to the survival and development of our modern civilization and will be vital as humanity faces new challenges in the future.

Hartmann, creator of the “hunter versus farmer” theory of ADHD, examines the differences in neurology between people with ADHD and those without, sharing recent discoveries that confirm the existence of an ADHD gene and the global catastrophe 40,000 years ago that triggered its development. He cites examples of significant innovators with ADHD traits, such as Ben Franklin and Thomas Edison, and argues that the children who possess the ADHD gene have neurology that is wired to give them brilliant success as artists, innovators, inventors, explorers, and entrepreneurs.

Emphasizing the role that parents and teachers can play in harnessing the advantages of ADHD, he shares the story of how Edison was expelled from school for ADHD-related behavior and luckily his mother understood how to salvage his self-esteem and prepare him for a lifetime of success. Offering concrete strategies for nurturing, educating, and helping these children reach their full potential, Hartmann shows that rather than being “problems” such children are a vital gift to our society and the world.

Thom Hartmann is the host of the nationally and internationally syndicated talkshow The Thom Hartmann Program and the TV show The Big Picture on the Free Speech TV network. He is the award-winning New York Times bestselling author of 24 books, including Attention Deficit Disorder: A Different Perception, ADHD and the Edison Gene, and The Last Hours of Ancient Sunlight, which inspired Leonardo DiCaprio’s film The 11th Hour. A former psychotherapist and founder of the Hunter School, a residential and day school for children with ADHD, he lives in Washington, D.C.

Praise For ADHD and the Edison Gene: A Drug-Free Approach to Managing the Unique Qualities of Your Child…

“Like Edison, Thom Hartmann is a visionary who uses history to illuminate the potential cost to society of shackling unique minds aching to soar. He questions the cultural imperative that compels us to label what is outside the bell curve as pathological rather than extraordinary. In this new edition, Hartmann urges us to nurture the fearlessly innovative child and celebrate their differences. Our futures will ultimately be shaped by those undaunted by the spectra of the impossible--because they have been taught to believe in their own self-worth.”
— Ellen Littman, Ph.D., coauthor of Understanding Girls with ADHD

“Instead of pathologizing the differences we call ADHD, we need to value neurodiversity, and Thom’s book shows us in rich detail how and why this is true. Thom’s work can help protect children and adults from the devastating effects of being viewed through a pervasive pathological lens--a much more severe problem than ADHD could ever be!”
— Sari Solden, M.S., L.M.F.T., psychotherapist and author of Women with Attention Deficit Disorder and

“Thom Hartmann has made one of the most important contributions to transforming our understanding of ADHD. Thom was the first to consider ADHD in an evolutionary context. He showed that ADHD has not only a significant survival advantage in hunter gatherer societies, but that it also confers powerful advantages in our contemporary civilization. Thom was one of the very first to comment on the link between ADHD and creativity. He will be recognized as a pioneer contributing to the reconceptualization of ADHD from being simply a ‘disorder’ to being viewed as a ‘mode of thought’ characterized by strengths, such as enhanced creativity.”
— Richard Silberstein Ph.D., professor emeritus, Swinburne University of Technology

"From the marvelous mind, and lively pen of Thom Hartmann comes this new opportunity to celebratethe magnificent diversity of how we learn to thrive Read it... and start a new conversation with your kids."
— Rabbi Hillel Zeitlin, Director, The Maryland Institute for Ericksonian Hypnosis & Psychotherapy

“The very gene associated with attention deficit hyperactivity disorder (ADHD) may have helped humans survive sudden climate changes before the end of the ice age. Thom Hartmann explains that children and adults with ADHD have characteristics such as risk-taking, distractibility, creativity and impulsiveness that are ideal for life paths that could well save us in the future. They're ideally suited to becoming entrepreneurs, explorers, inventors, innovators, emergency room physicians and fighter pilots. Drugs are not the answer; nor is the structured education system which has no room for "problem" children. Hartmann has strategies to help parents and teachers bring out the best in so-called hyperactive kids.”
— Nexus, February 2016

“The very gene associated with attention deficit hyperactivity disorder (ADHD) may have helped humans survive sudden climate changes before the end of the ice age.…children and adults with ADHD have characteristics such as risk-taking, distractibility, creativity and impulsiveness that are ideal for life paths that could well save us in the future. They’re ideally suited to becoming entrepreneurs, explorers, inventors, innovators, ER physicians and fighter pilots. Hartman has strategies to help parents and teachers bring out the best in so-called hyperactive kids.”
— Nexus Magazine, March 2016

“There is a lot of practical advice on how to interact and encourage ‘Edison Gene’ children; showing how to celebrate their skills rather than condemn their behavior. I found this book insightful, informative and inspirational. The message I took away from this book was: ‘child-hood’ is not a psychological disorder--stop drugging our kids.”
— New Dawn, Sandy Brightman, March 2016
or support indie stores by buying on
Copyright © 2020 American Booksellers Association