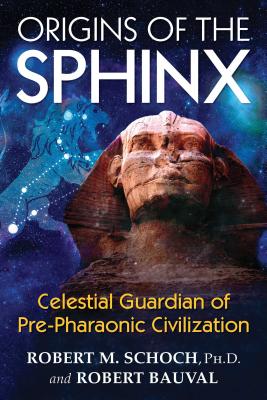 Origins of the Sphinx (Paperback)

• Examines how the Sphinx is contemporaneous with Göbekli Tepe, aligned with the constellation Leo, and was recarved during the Old Kingdom era of Egypt

• Reveals that the Sphinx was built during the actual historical Golden Age of ancient Egypt, the period known in legend as Zep Tepi

No other monument in the world evokes mystery like the Great Sphinx of Giza. It has survived the harsh climate of Egypt for thousands of years and will remain long after our own civilization is gone. According to orthodox Egyptology, the Sphinx was built around 2500 BCE as a memorial to the pharaoh Khafre. Yet this “fact” has scant to no supportive evidence. When was the Sphinx really built and, most importantly, why?

In this provocative collaboration from two Egyptology outsiders, Robert M. Schoch, Ph.D., and Robert Bauval combine their decades of research to show how the Sphinx is thousands of years older than the conventional Egyptological timeline and was built by a long forgotten pre-Pharaonic civilization. They examine the known history of the Sphinx, contrasting what Egyptologists claim with prominent historical accounts and new research, including updates to Schoch’s geological water weathering research and reanalysis of seismic studies. Building on Bauval’s Orion Correlation Theory, they investigate the archaeoastronomical alignments of the monuments of the Giza Plateau and reveal how the pyramids and Sphinx were built to align with the constellations of Orion and Leo. Analyzing the evidence for a significantly older construction phase at Giza and the restoration and recarving of the Sphinx during the Old Kingdom era, they assert that the Sphinx was first built by an advanced pre-Pharaonic civilization that existed circa 12,000 years ago on the Giza Plateau, contemporaneous with the sophisticated Göbekli Tepe complex.

The authors examine how the monuments at Giza memorialize Zep Tepi, the Golden Age of legend shown here to be an actual historical time period from roughly 10,500 BCE through 9700 BCE. Moving us closer to an understanding of the true age and purpose of the Great Sphinx, Schoch and Bauval provide evidence of an early high civilization witnessed by the Great Sphinx before the end of the last ice age.

Robert M. Schoch, Ph.D., a tenured faculty member at Boston University, earned his doctorate in geology and geophysics at Yale University in 1983. His books include Pyramid Quest, Voyages of the Pyramid Builders, Voices of the Rocks, Stratigraphy, Environmental Science, and The Parapsychology Revolution.

Egyptian-born Robert Bauval began studying Egyptology in 1983. His first book, The Orion Mystery, was published in 1994, becoming a number-one bestseller translated into more than 25 languages. His research has been featured in documentaries throughout the world. He lives in Torremolinos, Spain.

Praise For Origins of the Sphinx: Celestial Guardian of Pre-Pharaonic Civilization…

“For a quarter-century, Schoch’s analysis of weathering at Giza and Bauval’s archaeoastronomic discoveries have challenged the consensus on prehistory, not merely of Egypt but of the world. This book expertly summarizes their case and its triumphant vindication in the 12,000-year-old sanctuary of Göbekli Tepe. The question is no longer whether they are right but where archaeology should go from here.”
— Joscelyn Godwin, author ofAtlantis and the Cycles of Time