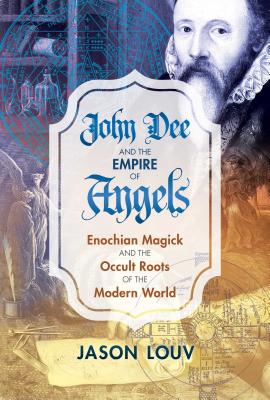 John Dee and the Empire of Angels

Enochian Magick and the Occult Roots of the Modern World

A comprehensive look at the life and continuing influence of 16th-century scientific genius and occultist Dr. John Dee

• Presents an overview of Dee’s scientific achievements, intelligence and spy work, imperial strategizing, and his work developing methods to communicate with angels

Dr. John Dee (1527-1608), Queen Elizabeth I’s court advisor and astrologer, was the foremost scientific genius of the 16th century. Laying the foundation for modern science, he actively promoted mathematics and astronomy as well as made advances in navigation and optics that helped elevate England to the foremost imperial power in the world. Centuries ahead of his time, his theoretical work included the concept of light speed and prototypes for telescopes and solar panels. Dee, the original “007” (his crown-given moniker), even invented the idea of a “British Empire,” envisioning fledgling America as the new Atlantis, himself as Merlin, and Elizabeth as Arthur.

But, as Jason Louv explains, Dee was suppressed from mainstream history because he spent the second half of his career developing a method for contacting angels. After a brilliant ascent from star student at Cambridge to scientific advisor to the Queen, Dee, with the help of a disreputable, criminal psychic named Edward Kelley, devoted ten years to communing with the angels and archangels of God. These spirit communications gave him the keys to Enochian, the language that mankind spoke before the fall from Eden. Piecing together Dee’s fragmentary Spirit Diaries and scrying sessions, the author examines Enochian in precise detail and explains how the angels used Dee and Kelley as agents to establish a New World Order that they hoped would unify all monotheistic religions and eventually dominate the entire globe.

Presenting a comprehensive overview of Dee’s life and work, Louv examines his scientific achievements, intelligence and spy work, imperial strategizing, and Enochian magick, establishing a psychohistory of John Dee as a singular force and fundamental driver of Western history. Exploring Dee’s influence on Sir Francis Bacon, the development of modern science, 17th-century Rosicrucianism, the 19th-century occult revival, and 20th-century occultists such as Jack Parsons, Aleister Crowley, and Anton LaVey, Louv shows how John Dee continues to impact science and the occult to this day.

Praise For John Dee and the Empire of Angels: Enochian Magick and the Occult Roots of the Modern World…

"Written in breezy, informal prose, Louv’s overstuffed book will appeal to those interested in angels or the occult."
— Publishers Weekly

“John Dee is the original Elizabethan mage-scientist, who invented the British Empire and invested it with magical power. He is to Elizabeth what Merlin was to Arthur, except he was real. Here’s the original technology of weaponized memes, psyops, and empire building in a gripping, authoritative account of how and why we became an occult society.”
— Douglas Rushkoff, author of Aleister and Adolf and Throwing Rocks at the Google Bus

“Any biographical treatment of John Dee must be nothing less than epic--and Jason Louv has gloriously achieved this in John Dee and the Empire of Angels, a truly comprehensive, broad-spectrum, and lavishly beautiful historical study of the master magus and the counter-current of secret history Dee launched into the world, which has affected us all.”
— Mitch Horowitz, PEN Award-winning author of Occult America and The Miracle Club

“A crazy plunge into the weird world of angels and those brave or foolish enough to try to contact them. Be prepared, for this book illuminates the dark corners of history that many institutions would prefer to go unexplored and unmentioned--I’m thankful for the angels that aided Jason in his creation of this mind-spinning, glorious work of occult genius.”
— Duncan Trussell, host of The Duncan Trussell Family Hour podcast

“Renaissance magus John Dee boldly set out to systematically tap the mind of God by communicating directly with a complex hierarchy of ‘angelic’ intelligences. It can be argued that he succeeded. His magical diaries have long held intense fascination among Qabalists, alchemists, and explorers of human consciousness who have developed workable magical systems from these records. Jason Louv’s work succeeds, with breathtaking thoroughness, to tell this amazing and true magical tale. More importantly, he also reveals the profound geopolitical significance of Dee’s magical explorations--effects that still shape the global realities of today.”
— Lon Milo DuQuette, author of Enochian Vision Magick

“Jason Louv’s John Dee and the Empire of Angels is a groundbreaking new assessment of one of the Western world’s most influential polymaths. Through a combination of intellectual rigor, sensitivity to both historical and current sociopolitical climates, and perhaps a bit of his own intuitive scrying, Louv offers us a crystalline view of John Dee’s visionary mind and complicated legacy.”
— Pam Grossman, author of What Is a Witch and host of The Witch Wave podcast

“Jason Louv’s masterful account of the enigmatic Elizabethan magus John Dee places him in the top tier of new esoteric writers. . . . Louv’s assertion of Dee as both a creator and custodian of Western civilization is thought-provoking, and it is backed up by meticulous research. Highly recommended.”
— Brendan McCarthy, artist, designer, and cowriter of Mad Max: Fury Road

“The Dee story is among the most mystifying and important in the entire history of the Western esoteric tradition. And here, Jason Louv has given us the most complete, complex, and balanced account yet of Dee and his aftermath. An awesome achievement.”
— Ralph Abraham, author of Chaos, Gaia, Eros

“Jason Louv’s book is absolutely invaluable. It contextualizes the very bedrock that Western ceremonial magic is based on. Dee and Kelly’s legendary experiments are the cornerstone of our Western understanding of how magic works. But there’s more to it than that. Louv’s impressive work is not only an enjoyable, adventurous journey into esoteric history but also one into the multifaceted--and sometimes dangerous--machinations of the human mind.”
— Carl Abrahamsson, author of Occulture: The Unseen Forces That Drive Culture Forward

“Jason Louv weaves a masterfully poetic web that first introduces you and then sucks you into Dee’s luminous world of magick. This book is not just a book about the occult and magick; it’s also a unique historical reference guide that I found to be a hypnotic read. Jason is a brilliant mind and writer, and this book proves that.”
— Zach Leary, host of the MAPS. and It’s All Happening podcasts

“Never has there been a more valuable and more prescient time than NOW to have John Dee and the Empire of Angels published.”
— E. Elias Merhige, director of Begotten and Shadow of the Vampire

“This is the first book I’ve seen where Dee’s angelic magic is neither discussed in isolation, nor dismissed as an eccentric sideline, but recognized as a key part of Dee’s philosophy and political influence right up to the present day.”
— Lionel Snell (a.k.a. Ramsey Dukes), author of My Years of Magical Thinking

“Our current magical revival is largely defined by the restoration of context. It is pleasing to see Dee and Kelley put back into the historical currents that they both defined and were defined by, where they can come alive once again after more than a century’s relegation to the cabinets of Victorian orders. The Queen’s conjuror returns to Mortlake.”
— Gordon White, author of Pieces of Eight, blogger and podcast host of Rune Soup

Jason Louv is the author of seven books, including Generation Hex, Ultraculture, and Thee Psychick Bible. He runs the high-traffic site Ultraculture.org and teaches courses on magick and spirituality at Magick.me. He has written for many popular websites, including Boing Boing, VICE News, Motherboard, and Esquire Online. He lives in Texas.
Loading...
or support indie stores by buying on