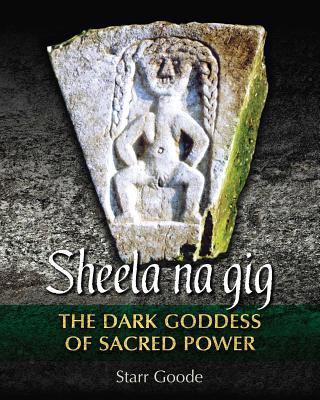 The Dark Goddess of Sacred Power

• Provides meditations on the Sheelas the author encountered in Ireland, England, Scotland, and Wales, allowing readers to commune with the power of these icons

• Includes more than 150 photographs and illustrations from around the world

For millennia, the human imagination has been devoted to the Goddess, so it is hardly a surprise to find images of supernatural females like Sheela na gigs adorning sacred and secular architecture throughout Ireland, England, Wales, and Scotland. Appearing on rural churches, castles, bridges, holy wells, tombs, and standing stones, these powerful images of a figure fearlessly displaying her vulva embody the power of the Dark Goddess over the mysteries of sex, life, death, and rebirth.

Exploring the art and myth of the Sheela na gig from Celtic and Classical times back to Paleolithic cave art, Starr Goode shows how the Sheela embraces a conundrum of opposites: she clearly offers up her ripe sex yet emanates a repelling menace from the upper half of her hag-like body. Through more than 150 photographs, the author shows how the Sheela is a goddess with the power to renew, a folk deity used to help women survive childbirth, and, as a guardian of doorways and castle walls, a liminal entity representing the gateway to the divine. She explains how these powerful images survived eradication during the rise of Christianity and retained their preeminent positions on sacred sites, including medieval churches.

The author provides meditations on the individual Sheelas she encountered during her 25 years of research, allowing readers to commune with these icons and feel the power they emanate. Exploring comparable figures such as Baubo, Medusa, the Neolithic Frog Goddess, and vulva depictions in cave art, she reveals the female sacred display to be a universal archetype, the most enduring image of creativity throughout history, and illustrates how cultures from Africa and Ecuador to India and Australia possess similar images depicting goddesses parting their thighs to reveal sacred powers.

Explaining the role of the Sheela na gig in restoring the Divine Feminine, the author shows the Sheela to be an icon that makes visible the cycles of birth, death, and renewal all humans experience and a necessary antidote to centuries of suppression of the primal power of women, of nature, and of the imagination.

“. . . an exciting book on the Sheela na gig, an iconic image Starr Goode has called ‘the perfect antidote to the war on women.’ History, travelogue, and an artist’s insightful ‘gaze’ make this a must-read and very accessible text.”
— Vicki Noble, author and co-creator of Motherpeace Tarot

“. . . groundbreaking, comprehensive, and fascinating. . . . No study of the feminine archetype is complete without the insight, knowledge, and extensive imagery presented in this book.”
— Anne Baring, author of The Dream of the Cosmos: A Quest for the Soul

“. . . an all-encompassing layered work where all the parts harmonize with the whole . . . a poetic paean to the Great Mother. The writing is clear and exquisite. I strongly recommend it not only to students and researchers on women’s spirituality but to the public at large.”
— Cristina Biaggi, Ph.D., author of Habitations of the Great Goddess

“Starr Goode has written a masterful work on the Sheela na gigs. She gives a solid historic and prehistoric foundation for the iconography of the Sheelas, beginning with the Aurignacian period of the Upper Paleolithic. Goode shares her wealth of knowledge, and she beautifully balances the scholarly with a deep sense of the spirituality which the Sheelas represent.”
— Miriam Robbins Dexter , author of Whence the Goddesses: A Source Book

Starr Goode, MA, teaches writing and literature at Santa Monica College. An award winning writer, she has been profiled in the LA Weekly, the Los Angeles Times, the Wall Street Journal, and The New Yorker. She was the producer and moderator for the cable TV series The Goddess in Art, the episodes of which are now housed in the permanent collection of the Getty Museum as well as available on YouTube. She lives in Santa Monica, California.
Loading...
or support indie stores by buying on