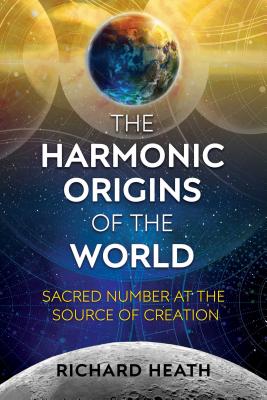 The Harmonic Origins of the World (Paperback)

Sacred Number at the Source of Creation

A profound exploration of the simple numerical ratios that underlie our solar system, its musical harmony, and our earliest religious beliefs

• Reveals how the orbits of Jupiter, Saturn, and Uranus relate to the Moon and the inner planets as an octave with musical scales

• Explains how the solar system functions as a musical instrument and how this led to the rise of intelligent life, civilization, and culture on our planet

Exploring the simple mathematical relationships that underlie the cycles of the solar system and the music of Earth, Richard Heath reveals how Neolithic astronomers discovered these ratios using megalithic monuments like Stonehenge and the Carnac stones, discoveries that informed later myths and stories including the Epic of Gilgamesh, the Resurrection of Osiris, the Rg Veda, the Hebrew Bible, Homer’s epic tales, and the Return of Quetzalcoatl. He explains how this harmonic planetary knowledge formed the basis of the earliest religious systems, in which planets were seen as gods, and shows how they spread through Sumer, Egypt, and India into Babylon, Judea, Mexico, and archaic Greece. He exposes how the secret knowledge encoded within the Bible’s god YHWH was lost as Greek logic and reason steadily weakened mythological beliefs.

Revealing the mysteries of the octave and of our musical scales, Heath shows how the orbits of the outer and inner planets gave a structure to time, which our Moon’s orbit could then turn into a harmonic matrix. He explains how planetary time came to function as a finely tuned musical instrument, leading to the rise of intelligent life on our planet. He demonstrates how this harmonic science of numbers can be read in the secret symbolism and sacred geometry of ancient cities such as Teotihuacan and in temples such as the Parthenon, connecting the higher worlds of planetary time and harmonics with the spiritual and physical life on Earth.

Recasting our understanding of the solar system, Heath seeks to reawaken humanity’s understanding of how sacred numbers structure reality, offering an opportunity to recover this lost harmonic doctrine and reclaim our intended role in the outer life of our planet.

After decades of technical and spiritual training, Richard Heath became interested in megalithic astronomy and its numerical skillset. He has written five books on the sacred use of numbers. In Matrix of Creation he explores those found in the planetary world, in Sacred Number and the Origins of Civilization he explores those important to ancient civilizations, and in Precessional Time and the Evolution of Consciousness he examines the numbers that define the important Ages of the world. In Sacred Number and the Lords of Time he provides an alternative history for megalithic astronomy, and in The Harmonic Origins of the World, he explains how the megalithic discovered planetary harmony through counting lunar months, thus explaining why ancient texts were informed by harmonic numbers. He lives in the Preseli Hills of West Wales.

Praise For The Harmonic Origins of the World: Sacred Number at the Source of Creation…

“We have long known, thanks to Ernest McClain, that the ancients were obsessed with harmonic numbers and that the Bible encodes these from beginning to end. Now new evidence appears, as these numbers correlate with the planetary periods, and their discovery is pushed far back into the prehistoric era. Richard Heath’s work, based not on speculation but on objective data, challenges all accepted notions of cultural evolution and religious origins.”
— JOSCELYN GODWIN, author of Harmonies of Heaven and Earth

“In this book the author reveals himself as the natural successor to Ernest McClain. As McClain before him, Heath has realized the extent to which the natural harmony of music binds into one the ‘within’ and ‘without’ of man’s world. He introduces us first to the observable recurrence of numbers underlying ancient astronomical sightings and then skilfully reveals the connection with the harmonic numbers of the sexagesimal system discovered by the Sumerians and Babylonians. Underpinning ideas with superb graphics and skilful numerical tables, he shows the ancient scribes, priests and ‘gentlemen of leisure’ in the Aristotelian sense, to be most subtle--in many cases far more so than we who work so hard to understand them. The progression by which he reveals his thesis is impressive.”
— Pete Dello, singer-songwriter, composer, and musicologist
or support indie stores by buying on
Copyright © 2020 American Booksellers Association