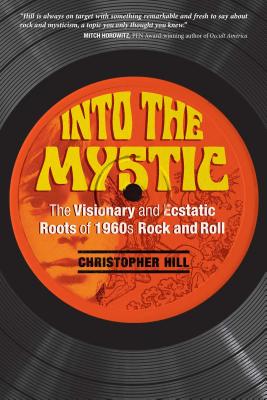 The Visionary and Ecstatic Roots of 1960s Rock and Roll

Explores the visionary, mystical, and ecstatic traditions that influenced the music of the 1960s

• Examines the visionary, spiritual, and mystical influences on the Grateful Dead, the Beatles, the Rolling Stones, Bob Dylan, Van Morrison, the Incredible String Band, the Left Banke, Lou Reed and the Velvet Underground, and others

The 1960s were a time of huge transformation, sustained and amplified by the music of that era: Rock and Roll. During the 19th and 20th centuries visionary and esoteric spiritual traditions influenced first literature, then film. In the 1960s they entered the realm of popular music, catalyzing the ecstatic experiences that empowered a generation.

Exploring how 1960s rock and roll music became a school of visionary art, Christopher Hill shows how music raised consciousness on both the individual and collective levels to bring about a transformation of the planet. The author traces how rock and roll rose from the sacred music of the African Diaspora, harnessing its ecstatic power for evoking spiritual experiences through music. He shows how the British Invasion, beginning with the Beatles in the early 1960s, acted as the “detonator” to explode visionary music into the mainstream. He explains how 60s rock and roll made a direct appeal to the imaginations of young people, giving them a larger set of reference points around which to understand life. Exploring the sources 1960s musicians drew upon to evoke the initiatory experience, he reveals the influence of European folk traditions, medieval Troubadours, and a lost American history of ecstatic politics and shows how a revival of the ancient use of psychedelic substances was the strongest agent of change, causing the ecstatic, mythic, and sacred to enter the consciousness of a generation.

The author examines the mythic narratives that underscored the work of the Grateful Dead, the French symbolist poets who inspired Bob Dylan, the hallucinatory England of the Beatles’ Sgt. Pepper, the tale of the Rolling Stones and the Lord of Misrule, Van Morrison’s astral journeys, and the dark mysticism of Lou Reed and the Velvet Underground. Evoking the visionary and apocalyptic atmosphere in which the music of the 1960s was received, the author helps each of us to better understand this transformative era and its mystical roots.

Praise For Into the Mystic: The Visionary and Ecstatic Roots of 1960s Rock and Roll…

"Hill’s book will appeal to wide audiences, and fans of classic rock will be particularly ecstatic about the many enlightening (and potentially unexpected) spiritual facts to be found here."
— Publishers Weekly

“I have rarely read a book about the occult and modern culture with so many original insights. Christopher Hill zigs when others zag. He is always on target with something remarkable and fresh to say about rock and mysticism, a topic you only thought you knew.”
— Mitch Horowitz, PEN Award-winning author of Occult America

“Like a third eye opening, Into the Mystic illuminates the spiritual awakening that gave popular music its messianic fervor in the renaissance era that heralded the 1960s. The scope of Christopher Hill’s inquiry refracts like a psychedelic prism, with a sense of wonder at the tale unfolding and an appreciation of why it continues to fascinate and resonate within our highest consciousness.”
— Lenny Kaye, musician and producer

“What would a history look like that took the rhythms, beats, dances, and trance states of blues, gospel, and rock ’n’ roll as seriously as it took elections, wars, and arrogant men? It would be a poetic history of numinous desire, ecstatic release, and freedom. It would intuit and then trace an African-American-British visionary tradition aching as much with the sufferings of American chattel slavery and the psychedelic trips of the counterculture as the mythical channelings of William Blake. It would not look away from either the utopian hopes or the horrible failures and fundamentalist backlashes. It would look, in fact, like this weird and wonderful book.”
— Jeffrey J. Kripal, author of Esalen: America and the Religion of No Religion

“Into the Mystic is a fascinating and inspiring read, providing extensive knowledge and brilliant insights carried by eloquent and, at times, poetic writing. And most important, it’s a compelling articulation of the centrality of visionary art--and in particular 1960s rock-and-roll music--in the promise that ‘the division between Heaven and Earth’ can be repealed. Christopher Hill places the rock music of the 1960s in its proper historical lineage as a cultural phenomenon far beyond mere entertainment, indeed central to the consciousness transformation revolution--the psychedelic renaissance that seemed to stall or at least dramatically wane in the 1970s. An erudite, eloquent, and potent love song to the liberating spirit of 1960s rock music--its connection to the lineage of ‘the secret garden’ (‘the secret eternal revolution’) and ‘the ancient dance’--and its relevance to the continuing urgent need for a yet deeper liberation of soul and society. A treasure trove of brilliant and unexpected revelations.”
— Stephen Gray, author of Cannabis and Spirituality

"From the time Chris started contributing reviews to Record Magazine, up to the present day, I’ve thought, and told others, he was, on any given day, the finest music writer in this country, and one of the best in the world. With Into the Mystic: The Visionary and Ecstatic Roots of 1960s Rock and Roll I rest my case. "
— David McGee, Deep Roots Magazine

“Christopher Hill is an intelligent and insightful critic and his enthusiasm for his subject tends to be infectious. He writes here an ambitious but not overly broad commentary on the emergence of a Dionysiac tradition of sixties rock and roll taking place in the midst of an Apollonian power structure collapsing under its own weight. .. whether you accept his thesis or not, he charts many hitherto little-traveled byways and offers up many intriguing theories…”
— Francis DiMenno, The Noise-Boston.com

"Into the Mystic proves rich with information overall, and Hill makes some fascinating points about the cultural, historical and biographical tributaries that flow together to create a given band’s esthetic or style….(T)hough Hill’s background is in music journalism, he’s often at his most interesting when discussing Rimbaud or Sufism or troubadours or slavery."
— Amy Glynn, Paste Magazine

"(Hill) quite literally turns on the reader as much as the music did over 50 years ago. . . .(He) offers a liberating perspective that will make you see the songs you know by heart in a brand new life. It truly is a revelation to feel your way through the energy that shifted cultural perceptions."
— Alanna Wright, Spiral Nature Magazine

"If you want to be entertained by an often knowledgeable exegesis of the ecstatic and mystic content of the music of the 1960’s, then this is the book for you. Helped by a flowing style, the author has an excellent feel for the music, which, somehow, he manages to convey into words (no mean feat)."
— Robin Carlile, Magonia Review of Books

Christopher Hill has written about rock and roll music in the pages of Spin, Record Magazine, International Musician, Chicago Magazine, Downbeat, Deep Roots Magazine, and other national and regional publications. His work has been anthologized in The Rolling Stone Record Review, and he is the author of Holidays and Holy Nights. Currently a contributing editor at Deep Roots Magazine, he lives in Madison, Wisconsin.
Loading...
or support indie stores by buying on