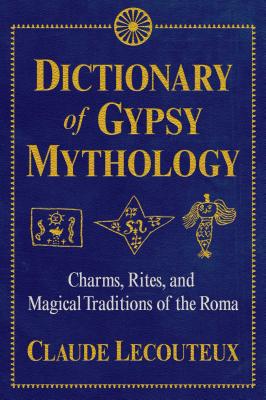 Charms, Rites, and Magical Traditions of the Roma

• Presents the origin myths and magical traditions of the gypsies, including their legendary ties to Egypt, animal ancestors, and tree spirits

• Examines the three major settings of gypsy folktales--the forest, the waters, and the mountain--and shows how their world is full of spirits

Although their own myths and their common name point to Egyptian origins for the gypsies, the Rom, as they call themselves, originated in India, as evidenced by studies of their language. They arrived in Europe in the ninth century and spread across the continent from East to West, reaching England in the 15th century and Scandinavia by the end of the 16th century. A nomadic people, these wanderers were reviled by local populaces wherever they went and regarded as misfits, intruders, foreigners, and thieves.

Drawing on a number of sources never before available outside of Eastern Europe, Claude Lecouteux reconstructs the gypsy oral tradition to provide a comprehensive A-to-Z look at gypsy mythology, including their folktales, rites, songs, nursery rhymes, jokes, and magical traditions. His main source is material collected by Heinrich Adalbert von Wlislocki (1856-1907), an ethnologist who lived with gypsies in Romania, Transylvania, and Hungary in the latter half of the 19th century. He presents the origin myths of the gypsies, legends which form the ancestral memory of the gypsy tribes and often closely touch on their daily life.

Lecouteux explores the full range of supernatural beings that inhabit the gypsy world, including fairies, undines, ogres, giants, dog-people, and demons, and he examines the three major settings of gypsy folktales--the forest, the waters, and the mountain, which they worshiped as a sacred being in its own right. He also reveals how coexisting with peoples of different religions led the gypsies to adapt or borrow stories and figures from these groups, and he shows how the religious concepts and sacred stories of the Rom testify to a profound syncretism of pagan traditions and Christianity.

Complete with rare illustrations and information from obscure sources appearing for the first time in English, this detailed reference work represents an excellent resource for scholars and those seeking to reconnect to their forgotten gypsy heritage.

Praise For Dictionary of Gypsy Mythology: Charms, Rites, and Magical Traditions of the Roma…

“Dictionary of Gypsy Mythology by Claude Lecouteux is an eye-opening revelation of the wealth and riches of a people and culture struck by hatred and poverty from their fellow humans due to their needs and ways. A deeply needed recognition and sharing of a group long reviled and antagonized that was able to keep its soul alive in the face of persecution. Truly the heart of the Gypsy is worth its weight in gold. An invaluable history and insight into a unique and strong people.”
— Maja D’Aoust, Witch of the Dawn, coauthor of The Secret Source

“With the Dictionary of Gypsy Mythology, Claude Lecouteux has filled a void long overdue in its need for address. He approaches a mysterious and all too oft misunderstood culture with respect, compassion, and genuine interest. The resulting text is compelling, informative, educational, and practical, as the alphabetical layout lends itself to research as well as reading for pleasure.”
— Vanessa Sinclair, Psy.D., psychoanalyst, artist, and author of Switching Mirrors

"This is a great little book; clear, easy, cross referenced and a great starting point for this hidden culture. It contains none of the myths and stories told to me about my people in the depths of night, but then I am from Sussex not Eastern Europe. However, its foundation seems solid - my culture is a blend of Christian and Pagan faiths, rooted in nature and a respect for the nature around itself."
— Karen Smith, Pagan Dawn Magazine