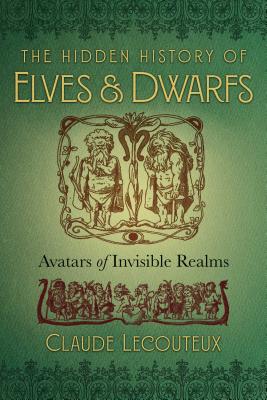 The Hidden History of Elves and Dwarfs

A comprehensive examination of the intertwined mythology, folklore, and literary history of the little people

• Reveals the role the church played in changing them from fearless, shape-shifting warriors with magical powers into cheerful helpmates and cute garden gnomes

Most people are familiar with the popular image of elves as Santa’s helpers and dwarfs as little bearded men wearing red caps, who are mischievous and playful, helpful and sly, industrious and dexterous. But their roots go far deeper than their appearance in fairy tales and popular stories. Elves and dwarfs are survivors of a much older belief system that predates Christianity and was widespread throughout Western Europe.

Sharing his extensive analysis of Germanic and Norse legends, as well as Roman, Celtic, and medieval literature, Claude Lecouteux explores the ancient, intertwined history of dwarfs and elves. He reveals how both were once peoples who lived in wild regions as keepers of the secrets of nature. They were able to change their size at will and had superhuman strength and healing powers. They were excellent smiths, crafting swords that nothing could dull as well as magical jewelry, and often entered into the service of lords or heroes. They were a part of the everyday life of our ancestors before they were transformed by fairy tales and church texts into the mythical creatures we know today.

Lecouteux shows how, in earlier folklore, elves and dwarfs were interchangeable, gradually evolving over time to express very different kinds of beings. “Dwarf,” “giant,” and even “elf” did not necessarily connote size but referred to races with different skills. Elves were more ethereal, offering protection and kindness, while dwarfs reflected a more corporeal form of spirit, often appearing as messengers from the underworld. Yet dwarfs and elves could be bargained with, and our ancestors would leave a broken object outside the door at night with the hope that a dwarf or elf (or other local spirit) would repair it.

Revealing the true roots of these helpful and powerful beings, including an in-depth exploration of one of the most famous dwarf/elf/fairy beings of the Middle Ages, Auberon or Oberon, also known as Alberich, Lecouteux shows how the magic of dwarfs and elves can be rekindled if we recognize their signs and invite them back into our world.

Praise For The Hidden History of Elves and Dwarfs: Avatars of Invisible Realms…

“. . . explores the transformations through time of the ‘little people’ of ancient Europe, both as ‘elementals’ personifying subtle powers of the natural world and as ambiguous projections of our own fears and desires. We have always had uneasy relations with these furtive beings who populate a secret world just out of sight, both close to home and beyond our ken, intimate and alien, a ‘hidden folk’ who manifest the quiet mysteries of our daily lives. Professor Lecouteux offers a comprehensive and engaging ‘unnatural history’ of these exotic familiars.”
— Craig R. Davis, professor of English language and literature at Smith College

“Claude Lecouteux shares long-needed insight into the historic and mythological origins of dwarfs and elves and into the modern plight without them. This book is a hallmark read in understanding the legacy and impact of invisible worlds.”
— S. Kelley Harrell, M.Div., author of Runic Book of Days

“In The Hidden History of Elves and Dwarfs Claude Lecouteux’s wide-ranging knowledge and insights are focused upon a significant part of European magical tradition and mythology, the realm of what he calls ‘lower mythology,’ of which the dwarfs are the best-known and most persistent characters. In Northern Tradition mythology, dwarfs are best known for making precious and magical artifacts such as Odin’s spear, Thor’s hammer, Freya’s necklace, and the golden-bristled boar of the gods. Apart from making jewelry, weapons, and armor for the gods, the dwarfs have their own magical attributes. Aubéron has a bow whose arrows always hit the target, an impenetrable chain-mail coat, a horn, and magic cup.

Dwarfs are remembered in ancient Scandinavian place-names, and folktales from all over Europe embed the memory of dwarfs in the fabric of storytelling. Emerging from dense forests, mysterious lakes, burial mounds, and hollow mountains, sometimes they aid humans, but often they are unreliable assistants, for they have their own agendas. They exist within a world of fluid boundaries where transformation plays a major role.

Denizens of an otherworld that interpenetrates the human world, dwarfs and elves were demonized by churchmen and conflated with Biblical evil powers. The realm of elves and dwarfs was much wider and far more diverse than that. Claude Lecouteux defines the real difference between sprites, elves, dwarfs, duses, trolls, and various forms of giants that existed in human perception before their demonization. The Hidden History of Elves and Dwarfs is essential reading for everyone who has ever wondered exactly what dwarfs are and where they come from.”
— Nigel Pennick, author of The Pagan Book of Days

"Modern studies rather tend to emphasize the cultural and psychological over the mythological. Nevertheless, Lecouteux marshals his scholarship and argues rationally, making a plausible case and maintaining interest throughout. The translation makes this an easy read, full of engrossing material and engaging ideas. Also, it is good to hear a continental perspective on these matters."
— [MH], Northern Earth Magazine

"I found this book interesting with all the history from various cultures that Mr. Le Couteux was able to use to unravel a web that has been too long in place. I, myself, have always felt that elves were akin to Faery kind. So, I have ever had a place for them in my life and home. I have seen dwarves as energy to work with when doing some creative process, unusual when working with crystals and anything metal. And now, I know I was on the right track in the energy signatures that I was working on within my work."
— Dawn Borries, Pagan Pages