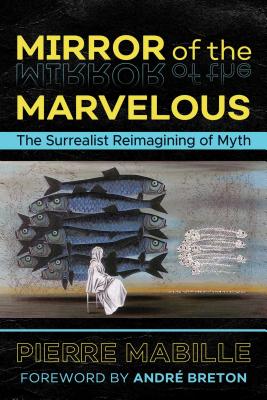 Mirror of the Marvelous

The Surrealist Reimagining of Myth

A surrealist exploration of the marvelous in ancient, classic, and modern works from around the world

First published in French as Miroir du merveilleux in 1940, Mirror of the Marvelous has long been considered one of the most significant and original books to have come out of the surrealist movement and Anaïs Nin suggested it as a source of inspiration, far ahead of its time.

Drawing on sacred and modern texts that share a quality of the marvelous, Pierre Mabille defines “the marvelous” as the point at which inner and outer realities are joined and the individual is simultaneously one with himself and with the world, thus recovering the true sense of the sacred. He shows how “the marvelous” goes beyond simply being a synonym for “the fantastic” to engage the entire emotional realm. Mabille cites a far-reaching range of texts, from the classic to the obscure, from Egyptian myth to Voodoo initiation ceremonies, from the ancient epic to the modern poem, from the creation myth to more contemporary visions of apocalypse. He includes surrealist analyses of works from William Blake, Edgar Allen Poe, William Shakespeare, Chrétien de Troyes, and Arthur Rimbaud; legends and folktales from Egypt, Iceland, Mexico, Africa, India, and other cultures; classics from Ovid, Plato, and Apuleius; Masonic ritual texts, Mesopotamia’s Epic of Gilgamesh, the Popol-Vuh, Lewis Caroll’s Alice through the Looking Glass, Solomon’s Song of Songs, and selections from Goethe’s Faust.

Mirror of the Marvelous actively defines the flame of the marvelous by showing its presence in those works where it burns the brightest.

Praise For Mirror of the Marvelous: The Surrealist Reimagining of Myth…

“Pierre Mabille’s Mirror of the Marvelous reflects on the strangely beautiful and often terrifying domains of visionary reality as expressed in world literature. His collection of classically unusual tales and sympathetic insightful interpretations provides the reader with an oasis for the Divine Imagination. Mabille’s association with the Surrealists helped link their aesthetic with the great tradition of Western occult symbolism. I am thrilled that Inner Traditions has brought Mirror of the Marvelous to the English-speaking world at last.”
— Alex Grey, artist and author of Net of Being and Sacred Mirrors

“One of those monumental works which to leave unread would be to renounce, once and for all, any hope of comprehending the surrealist spirit.”
— André Breton, author of Manifestoes of Surrealism

Pierre Mabille (1904-1952) was a doctor, writer, and editorial director of the famous art review Minotaure. Working as a surgeon in the Caribbean during World War II he was appointed French Cultural Attaché to Haiti at the war’s end and helped establish the Haitian Bureau of Ethnology. Mabille is one of the most important writers to have participated in the surrealist movement, advancing surrealist concerns into the areas of medicine, hermetic traditions, and social structures. His major works include La construction de l’Homme, Thérèse de Lisieux, Égrégores ou la vie des civilisations, and Conscience Pictoral, Conscience Lumineuese.
Loading...
or support indie stores by buying on