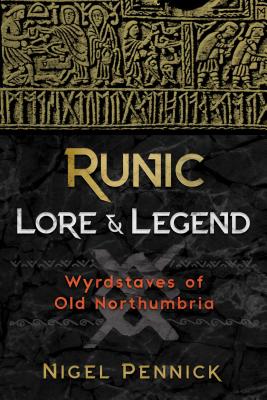 • Examines the 33 Northumbrian runes of the Anglo-Saxon Futhark, providing the meanings, historical uses, symbolism, and related tree and plant spirits for each

• Explores geomancy divination practices, the role of sacred numbers, and the power of the eight airts, or directions

• Provides a magical history of Northumbria, as well as a look at the otherworldly beings who call these lands home, including boggarts, brownies, and dragons

In the early Anglo-Saxon period, the region of Great Britain known as Northumbria was a kingdom in its own right. These lands, in what is now northern England and southeast Scotland, were the targets of the first Viking raids on Britain. This violent influx, followed by the establishment of trade routes with the Norse, brought the runes to the region, where they intermingled with local magical traditions and legends, resulting in the development of a practical runic wisdom entirely unique to Northumbria.

In this guide to the Wyrdstaves, or runic practices, of Old Northumbria, Nigel Pennick examines the thirty-three runes of the Anglo-Saxon Futhark and how they were used in Old England for weaving the web of Wyrd. Sharing runic lore and legends from the area, he explains how the Northumbrian runes are unique because they contain elements from all the cultures of the region, including the Picts, Britons, Romans, Angles, Scots, and Norse. He illustrates how each rune in this tradition is a storehouse of ancient knowledge, detailing the meanings, historical uses, symbolism, and related tree and plant spirits for each of the thirty-three runes. The author describes the Northumbrian use of runes in magic and encryption and explores geomancy divination practices, the role of sacred numbers, and the power of the eight airts, or directions. He also shows how the Northumbrian runes have a close relationship with Ogam, the tree alphabet of the ancient Celts.

Providing a magical history of Northumbria, as well as a look at the otherworldly beings who call these lands home, including boggarts, brownies, and dragons, Pennick explains how traditional spirituality is intimately tied to the landscape and the cycle of the seasons. He reveals how the runic tradition is still vibrantly alive in this area and ready for us to reawaken to it.

Praise For Runic Lore and Legend: Wyrdstaves of Old Northumbria…

“In Runic Lore and Legend: Wyrdstaves of Old Northumbria, Pennick delivers the most thorough account of Anglo-Saxon history, mythology, and cosmology. His ability to weave their narrative into the use of the Northumbrian Runes and reveal their modern relevance is nothing less than magickal.”
— S. Kelley Harrell, author of Runic Book of Days

“Nigel Pennick is one of the greatest living runic experts, bringing meticulous research and a profound magical understanding to his subject. This important book examines the distinctive Anglo-Saxon Futhark of Northumbria, essentially setting the thirty-three runes in the context of both time and place.”
— Anna Franklin, author of Pagan Ways Tarot

“The magical runes of England have, ironically, been the most neglected of all the runic alphabets in writings in the English language. To have one of the leading authors on the wisdom of the runes pen this comprehensive manual on the Northumbrian wyrdstaves is a most valuable gift to all who follow the Northern Tradition. Pennick’s weaving of local history and lore around the runes illuminates his subject in a way that no other book has been able to achieve.”
— Richard Rudgley, author of The Return of Odin: The Modern Renaissance of Pagan Imagination

“Nigel Pennick is a true initiate who can demonstrate to the reader how nature and cosmos correlate to each other. He explains runes, medieval traditions, and Celtic magic in a pedagogic way that helps us understand how these topics are universal--something that gives us knowledge about ourselves and is of highest relevance for humankind today. I regularly return to Nigel Pennick’s books and am delighted to add Runic Lore and Legend: Wyrdstaves of Old Northumbria to my shelf.”
— Thomas Karlsson, Ph.D., author of Nightside of the Runes

"This book is far more than the cover promised--had I seen this in a bookshop I could have easily passed it over for something that appeared less intimidating but to have done so would have denied me the delightful, personable yet incredibly intelligent and thorough writing of this author... "
— Em Chuter, Pagan Dawn: Journal of the Pagan Federation

Nigel Pennick is an authority on ancient belief systems, traditions, runes, and geomancy and has traveled and lectured extensively in Europe and the United States. He is the author and illustrator of more than 50 books, including The Pagan Book of Days. The founder of the Institute of Geomantic Research and the Library of the European Tradition, he lives near Cambridge, England.
Loading...
or support indie stores by buying on