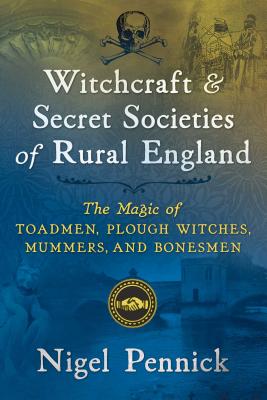 The Magic of Toadmen, Plough Witches, Mummers, and Bonesmen

• Describes the secret rites, ceremonies, and initiation rituals of guilds and rural fraternities such as the Shoemakers, Horsemen, Toadmen, Mummers, and Bonesmen

• Explains their use of masks, black face, and other disguises to avoid persecution

Centuries ago the remote, marshy plains of eastern England--the Fens--were drained to create agricultural land. The Fens remained isolated up until the nineteenth century, and it was this very isolation that helped preserve the ancient traditions of this area, traditions ruthlessly eradicated elsewhere in the British Isles. These magical folk traditions also owe their survival to secret rural societies, from craft guilds and trade unions to Morris dancers and village bands.

Exploring the folk customs and magical traditions of guilds and rural fraternities such as the Shoemakers and Horsemen and the secrets guarded by the Free Gardeners, Witches, Toadmen, and Bonesmen, Nigel Pennick shows how the common working people of the Fens belonged to secret societies based on their specific trade. He details the hidden aspects of rural life that most historians ignore--the magical current that flowed through the lives of working people--and describes the secret rites, ceremonies, oaths, and initiation rituals of the guilds and fraternities to which the folk belonged.

Drawing not only on scholarly research but also his personal contacts within these still living traditions, Pennick explains their use of masks, black face, and other disguises to avoid persecution and describes how wise woman healers and witches in rural villages were sought-after for their remedies. He shares the secrets of the toad-bone rite, which gave the Toadman control over animals and members of the opposite sex, and explores the guardian spirits thought to inhabit the Fens, including those of the Wild Hunt.

Providing insight into a world that has largely disappeared, one whose magic still echoes in lore and legend, Pennick shows that the rites, customs, and ceremonies of guilds and rural fraternities connect individuals to a wider community and, through collective action, to the power of Nature and the Cosmos.

An authority on ancient belief systems, traditions, runes, and geomancy, Nigel Pennick is the author of several books, including The Sacred World of the Celts, Secret Games of the Gods, and The Ancient Science of Geomancy. He lives near Cambridge, England, where he follows the oral tradition and Pagan lore of his native East Anglia.

Praise For Witchcraft and Secret Societies of Rural England: The Magic of Toadmen, Plough Witches, Mummers, and Bonesmen…

“Nigel Pennick is a true initiate who can demonstrate to the reader how nature and cosmos correlate to each other. I regularly return to Nigel Pennick’s books . . .”
— Thomas Karlsson, Ph.D., author of Nightside of the Runes,

"This book reminds us that one need look no further than modern day secular cultural celebrations that survived because they are so sacred, they transcend religion. It is a reminder that magic and witchcraft need not be fraternal, hidden, or done in circle, although it certainly can be. It does not necessarily entail candles, incense, or even religion at all. Sometimes, it’s just the living communing with the dead by doing what they did, and remembering events past, as the Wheel of the Year turns. It’s not necessarily mysterious at all, and can be as simple as what celebrates earth, people, and nature. It can be just for fun, and fellowship, as there are times when bonding with community and family, celebrating who we are, where we have come from, and teaching the children, is the most magical practice of them all. Pennick has written not only this fascinating masterpiece, but various others. Highly recommended reading!"
— Saoirse, PaganPages.org

"Well researched and wonderfully illustrated, Pennick’s telling of local history and mythology is written in an accessible, interesting and enthralling way and kept me engrossed from beginning to end. Very highly recommended!"
— June Kent, editor of Indie Shaman magazine Issue 41

"I was honestly not prepared for how amazing Witchcraft & Secret Societies of Rural England by Nigel Pennick turned out to be. I was expecting a scholarly text, or perhaps some fantastical legends, but what I ended up with was a perfect mix of both."
— The Magical Buffet

"...a curious and enlightening book about an area of England which has boasts a deeply embedded culture of folk customs and magical traditions. As Pennick points out, ‘the magical view of the world, dismissed as superstition by the modern worldview, was a valid means of living under harsh and difficult circumstances.'"
— Mark Jones, SpiralNature.com
or support indie stores by buying on
Copyright © 2020 American Booksellers Association