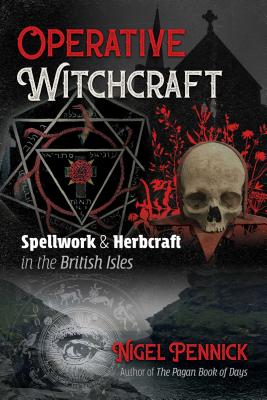 Spellwork and Herbcraft in the British Isles

• Explores witch’s familiars and fetches, animal magic, and the forms of witchcraft practiced by rural tradespeople, such as blacksmiths, herbalists, and artisans

• Details the evolution of public perception of witchcraft throughout England’s history, including the laws against witchcraft in place until the 1950s and witchcraft’s contentious relationship with the Christian church

In this practical guide, Nigel Pennick takes the reader on a journey through the practice of operative witchcraft in the British Isles from the Middle Ages and the Elizabethan era to the decriminalization of witchcraft in the 1950s and its practice today.

Highlighting uniquely English traditions, Pennick explores fetches and witch’s familiars, animal magic, and the forms of witchcraft practiced by rural tradespeople, such as blacksmiths, herbalists, and artisans, to enhance their professional work and compel others to do their bidding, both man and beast. He provides actual spells, charms, and folk incantations, along with details about the magical use of a variety of herbs, including nightshades, the creation of amulets and sigils, protection against the Evil Eye, and the use of aromatic oils. Pennick explains the best times of day for different types of magic, how to identify places of power, and the use of the paraphernalia of operative witchcraft, such as the broom, the witches’ dial, and pins, nails and thorns. He explores the belief in three different types of witches: white witches, who offer help and healing for a fee; black witches, who harm others; and gray witches, who practice both white and black magic. Examining witchcraft’s contentious relationship with the Christian church, he investigates the persecution of witches throughout the UK and the British West Indies up until the mid-20th century. He offers a look into the changing public perceptions of witchcraft and the treatment of its followers as well as revealing how English churchmen would offer magical solutions to the perceived threat of black witchcraft.

Painting an in-depth picture of English witchcraft, including how it relates to and differs from modern Wicca, Pennick reveals the foundation from which modern witchcraft arose. He shows how this context is necessary to effectively use these ancient skills and techniques and how the evolution of witchcraft will continue harmonizing the old ways with the new.

An authority on ancient belief systems, traditions, runes, and geomancy, Nigel Pennick is the author of several books, including The Sacred World of the Celts, Secret Games of the Gods, and The Ancient Science of Geomancy. He lives near Cambridge, England, where he follows the oral tradition and Pagan lore of his native East Anglia.

Praise For Operative Witchcraft: Spellwork and Herbcraft in the British Isles…

“In our postmodern world, appearances often upstage matters of real substance, and people freely adopt new personae as they please--witness the plethora of contemporary witches, many of whom share little in common with the sorts of rural figures that bore the name in earlier times. Nigel Pennick’s Operative Witchcraft is an unromanticized ‘warts and all’ survey of the real history and lore of witchcraft in his native England and elsewhere. This treasure trove of seldom-seen material encompasses topics ranging from toadmen and horsemen to weird plants and darker folk traditions, including a fascinating chapter on the syncretic links between British witchcraft and West Indian Obeah religion. One could not ask for a more knowledgeable and sympathetic guide through these shadow-filled realms than Nigel Pennick.”
— Michael Moynihan, coauthor of Lords of Chaos and coeditor of the journal TYR: Myth--Culture--Traditi

“Operative Witchcraft is a fascinating, wide-ranging, and detailed work that acknowledges and tackles the complex nature of British witchcraft. The book discusses the powers of the witch, how witches have been portrayed, and the persecution of them through legislation and unofficial violence borne of ancient fears. The comparison with West Indian Obeah highlights the repetition of old patterns of persecution in Britain’s former colonies. Nigel Pennick has long been a leading authority on this subject, and Operative Witchcraft is another excellent work, shining new light not only on the history of witchcraft but also on how it has been practiced over the centuries. This beautifully written and authoritative work, which is both accessible and academically rigorous, should grace the bookshelves of folklorists, historians, practitioners of witchcraft, and those with a general interest in this enduring aspect of our culture.”
— Val Thomas, herbalist, practitioner of witchcraft and natural magic, and author of A Witch’s K

“While most historians of witchcraft have focused on the early modern and Renaissance era (myself included), Pennick goes beyond the great conflagrations of Europe to show how magic and witchcraft survived into the twentieth century. Operative Witchcraft offers one interesting tidbit of forgotten magical history after the next--not a page went by that I didn’t stop and say, “Wow!” Well written, well researched, a fantastic addition to any witchcraft library.”
— Thomas Hatsis, author of The Witches’ Ointment

“Nigel Pennick stands with one leg in the eldritch world and one in the mundane, as all who know him can attest. After a lifetime of dedication to these ancient mysteries, both in theory and in practice, there is no one better qualified to lead the reader through the highways and byways of operative witchcraft.”
— Ian Read, former editor of Chaos International and Rûna magazines

“Yet another generous offering from Nigel Pennick! In Operative Witchcraft, Pennick’s extensive knowledge of British folk magic tradition builds a richly furnished mansion from the presumed molehill of its textual and material traces.”
— Danica Boyce, producer of Fair Folk podcast

“In this intriguing book, Nigel Pennick gives numerous examples of operative witchcraft--witchcraft as it was actually practiced and documented by earlier researchers. It also includes details of the techniques and practices he personally learned from traditional practitioners over a period of more than forty-five years.”
— Anna Franklin, author of The Hearth Witch’s Compendium and The Sacred Circle Tarot

"If you read Nigel Pennick’s Witchcraft and Secret Societies of Rural England and found yourself wanting more, look no further, Pennick has got you covered. His latest book, Operative Witchcraft: Spellwork & Herbcraft in the British Isles is an excellent follow up or stand-alone title. Here, buried in traditions of rural tradespeople, you’ll find the roots of magic and witchcraft as it’s practiced today. Pennick outlines in detail not just what the magic was, but why it was believed to work. Operative Witchcraft covers a lot of magical ground in its approximately 200 pages: the crafting of talismans, animal magic, identifying places of power, creating tools, herbal treatments, and more! He discusses the belief of the different types of witches: White, Black, and Gray. Eventually, he leads us to an exploration of what happened when these rural practices butted up against the Church. Thoroughly researched look at witchcraft’s past and possible future, get yourself a copy of Operative Witchcraft."
— The Magical Buffet