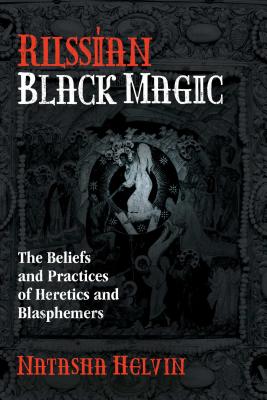 The Beliefs and Practices of Heretics and Blasphemers

A rare look into the history, theory, and craft of the black mages and sorcerers of Russia

• Provides insight into the fundamental ideology of black magic practitioners, from the universal laws of magic to the principles of morality

Born in the Soviet Union and descended from a matrilineal line of witches, Natasha Helvin offers a rare look into the secret practices of Russian black magic, passed down from teacher to disciple for generations both orally and through their grimoires bound in black. Drawing from her own experience, Helvin provides insight into the fundamental ideology of black magic practitioners, from the universal laws of magic to the principles of morality. She explains a mage’s view on fate and predestination, how the world was created, and their relationship with the demons that grant them their power. She examines the demonic pantheon as well as how a black sorcerer is able to influence the forces in the universe and pass on his or her powers and knowledge to further generations.

Exploring the history of occult practices in Russia, including how Christianity had a profound effect upon magic and witchcraft, Helvin shows how attempts to forcibly convert the Russian population to the Christian faith were widely resisted, and instead of these ancient pagan practices disappearing, they blended with Christian belief. Authorities repainted old pagan gods as demons in order to eradicate ancient traditions. Black magic became labelled as defiantly anti-Christian simply for preserving the old ways, and as a result, some branches of black magic evolved as a reaction against enforced Christianity and practitioners proudly accepted the label of “blasphemer” or “heretic.”

Through this book, readers can explore the Left-Hand path of Russian magic and its spells and rituals. The author explains about cemetery magic, sacrifices, the creation of Hell Icons, and places of power, such as crossroads, swamps, and abandoned villages, as well as the best times to practice black magic, how to choose the best grave for your spell, and how to summon demons. Providing many concrete examples of spells, Helvin demonstrates the broad range of what can be accomplished by those who practice the black arts, if they commit themselves to the craft.

Praise For Russian Black Magic: The Beliefs and Practices of Heretics and Blasphemers…

"A unique and expertly presented study, Russian Black Magic: The Beliefs and Practices of Heretics and Blasphemers will prove to be an immediate and enduringly popular addition to personal, professional, community, and academic library Metaphysical Studies collections in general, and Russian metaphysical supplemental studies lists."
— Midwest Book Review

Born in the Soviet Union, Natasha Helvin is an occultist, hereditary witch, and priestess in the Haitian Vodou tradition, as well as an avid scholar of other magical traditions. She learned the ancient Slavic secrets of magic and healing from her family and, as a child, often saw her grandmother and mother use magic in their everyday lives to help neighbors and friends. A professional rootworker and spiritual coach, she lives in the Pacific Northwest.
Loading...
or support indie stores by buying on