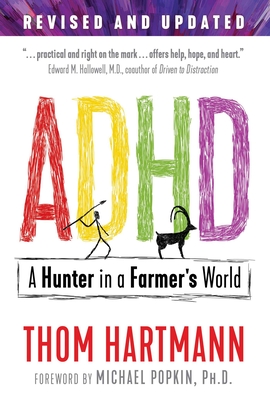 A Hunter in a Farmer’s World

• Explains that people with ADHD are not disordered or dysfunctional, but simply “hunters in a farmer’s world”--possessing a unique mental skill set that would have allowed them to thrive in a hunter-gatherer society

• Offers concrete non-drug methods and practices to help hunters--and their parents, teachers, and managers--embrace their differences, nurture creativity, and find success in school, at work, and at home

• Reveals how some of the world’s most successful people can be labeled as ADHD hunters, including Benjamin Franklin, Thomas Edison, and Andrew Carnegie

With 10 percent of the Western world’s children suspected of having Attention Deficit Disorder, or ADHD, and a growing number of adults self-diagnosing after decades of struggle, the question must be raised: How could Nature make such a “mistake”?

In this updated edition of his groundbreaking classic, Thom Hartmann explains that people with ADHD are not abnormal, disordered, or dysfunctional, but simply “hunters in a farmer’s world.” Often highly creative and single-minded in pursuit of a self-chosen goal, those with ADHD symptoms possess a unique mental skill set that would have allowed them to thrive in a hunter-gatherer society. As hunters, they would have been constantly scanning their environment, looking for food or threats (distractibility); they’d have to act without hesitation (impulsivity); and they’d have to love the high-stimulation and risk-filled environment of the hunting field. With our structured public schools, office workplaces, and factories those who inherit a surplus of “hunter skills” are often left frustrated in a world that doesn’t understand or support them.

As Hartmann shows, by reframing our view of ADHD, we can begin to see it not as a disorder, but as simply a difference and, in some ways, an advantage. He reveals how some of the world’s most successful people can be labeled as ADHD hunters and offers concrete non-drug methods and practices to help hunters--and their parents, teachers, and managers--embrace their differences, nurture creativity, and find success in school, at work, and at home. Providing a supportive “survival” guide to help fine tune your natural skill set, rather than suppress it, Hartmann shows that each mind--whether hunter, farmer, or somewhere in between--has value and great potential waiting to be tapped.

Thom Hartmann is the host of the nationally and internationally syndicated talkshow The Thom Hartmann Program and the TV show The Big Picture on the Free Speech TV network. He is the award-winning New York Times bestselling author of 24 books, including Attention Deficit Disorder: A Different Perception, ADHD and the Edison Gene, and The Last Hours of Ancient Sunlight, which inspired Leonardo DiCaprio’s film The 11th Hour. A former psychotherapist and founder of the Hunter School, a residential and day school for children with ADHD, he lives in Washington, D.C.

Praise For ADHD: A Hunter in a Farmer’s World…

“In this groundbreaking book, Thom Hartmann makes a unique contribution to our understanding of ADHD. In considering ADHD in an evolutionary context, Thom was the first to point out the survival advantages of ADHD in hunter-gatherer societies and also the first to identify the link between ADHD and creativity. As such, Thom will be recognized as a pioneer contributing to the reconceptualization of ADHD from being considered only a ‘disorder’ to being viewed as a ‘mode of thought’ characterized by enhanced flexibility and creativity.”
— Richard Silberstein, professor emeritus of cognitive neuroscience at Swinburne University

“It is refreshing to find a book that places ADHD in a framework that does not imply dysfunction. . . . The metaphor of a ‘hunter in a farmer’s world’ fits so many of the ADHD youngsters and adults with whom I have worked.”
— Margaret (Peg) Dawson, Ed.D., NCSP, codirector of the Center for Learning and Attention Disorders

“Why are attention deficit hyperactivity disorder and related conditions so common? Could they in some way be advantageous? These questions and some possible answers are woven through this book, providing basic factual information about ADHD with a twist that helps readers recognize the value--sometimes quite special--of people who have it.”
— Dale E. Hammerschmidt, M.D., FACP, emeritus professor of medicine at the University of Minnesota

“This book did for our family what years of being in and out of therapy failed to accomplish. It helped us to understand and appreciate each other’s unique way of doing and seeing.”
— Janie Bowman, mother of an ADHD adolescent

“A clear and positive view of our remarkable children with practical tips for the parent.”
— Stephen C. Davidson, M.Ed., founding member of “Safe Kids” of Georgia

“This book helped me better understand ADHD and gave me practical strategies on how to deal with these children in the classroom.”
— Anne Bennett, special education teacher, grades K-8

“ADHDers aren’t abnormal; they are uniquely gifted individuals in their own right. Thom Hartmann describes these ideas in a book that belongs in the hands of every educator, counselor, doctor, and parent.”
— Learning Disabilities Newsletter
or
Buy Here
Copyright © 2020 American Booksellers Association