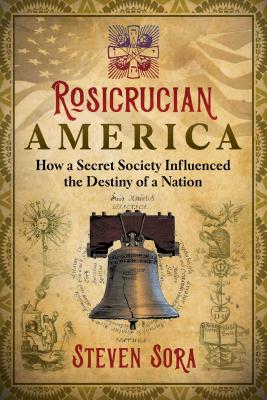 How a Secret Society Influenced the Destiny of a Nation

An in-depth history of Rosicrucianism, its key members, and their roles in the formation and settling of America

• Explores Sir Francis Bacon and Dr. John Dee’s deep influence on England’s colonization of America as well as the Rosicrucian influence on the Founding Fathers and on cities such as Philadelphia and Williamsburg

Dr. John Dee and his polymath protégé Sir Francis Bacon were the most influential men in the court of Queen Elizabeth I, part of an elite group with invisible control throughout Europe. And, as Steven Sora reveals, not only were they key members of the Rosicrucians, they were the driving force behind England’s colonization of the New World and the eventual establishment of the United States.

From Avalon in Newfoundland to New England to Pennsylvania and Virginia, Sora shows how Bacon and Dee’s Rosicrucian impact is felt throughout North America. He details Bacon’s possible authorship of the anonymous Rosicrucian texts of the early 1600s, his connections with Sir Walter Raleigh’s School of Night, and the origins of Rosicrucianism in Bacon’s Order of the Helmet. He explains how Bacon envisioned America as the New Atlantis, a utopia where liberty and freedom of learning prevailed--a key tenet of the “Invisible College” of the Rosicrucian Order--and how Dee convinced the Queen that England had rightful claims in the New World by drawing on legends of both King Arthur and Welsh Prince Madoc voyaging West to America.

Sora looks at Rosicrucian influences on the Founding Fathers and earliest settlers of America, such as Washington, Franklin, and William Penn of Pennsylvania, on the American Revolution, and on American colonies, such as the Williamsburg colony. He details how Penn invited Rosicrucians to Philadelphia and how the city’s layout follows esoteric principles, including a direct reference to Bacon’s New Atlantis. Moving into the 1800s and beyond, he reveals how a handful of Rosicrucians served as the Inner Sanctum of the Knights of the Golden Circle and how Rosicrucians are behind the Georgia Guidestones, carved granite monoliths with messages in ancient languages.

Providing a thorough and expansive view of Rosicrucianism, its occult origins, and its deep imprint on America, Sora shows how this secret society still continues to exert invisible influence on the modern world.

Praise For Rosicrucian America: How a Secret Society Influenced the Destiny of a Nation…

“Sora’s informative new book is a must for those eager for the truth about the secret roles played by the medieval Knights Templar, the Rosicrucians, and Freemasonry in the founding of the ‘New Atlantis.’ Now more than ever the world needs the truth about the individuals and the tenets they held dear, which was the secret blueprint for the founding of America. What was long ‘hidden in plain sight,’ Sora skillfully ‘brings into the light.’”
— Scott F. Wolter, forensic geologist, host of the Travel Channel’s America Unearthed

“Steven Sora has done it again. Following up on his immensely popular The Lost Treasure of the Knights Templar, Steven has woven another tapestry of well-researched, entertaining narrative, which provides America with many of the answers that the nation’s collective psyche currently seeks so desperately. Indeed, Rosicrucian America offers its readers a glimpse into the spiritual inspiration and alchemical transformation that provided much of the basis for the founding of the United States of America.”
— William F. Mann, Supreme Grand Master of the Sovereign Great Priory--Knights Templar of Canada

“What fun I had reading this book! Steven Sora has connected so many of my favorite topics into one woven tale--a real page-turner. For 50 years I’ve been studying the German Pietists of provincial Pennsylvania, the authorship question of William Shakespeare, the far-reaching influence of Sir Francis Bacon and Dr. John Dee, and William Penn’s hidden reasons for coming to America, among other topics in this book, but it took Stephen Sora to flesh it all out with the latest research and put it all together in one brilliant volume. Like the alchemical goal of a Rosicrucian, this book will transmute your appreciation for the destiny of America.”
— Robert R. Hieronimus, Ph.D., author of Founding Fathers, Secret Societies

“. . . explores ideals that evolved through the Crusades, the Renaissance, and the Enlightenment. Both known and unknown adepts worked to weave together the threads of intellectual, philosophical, and spiritual principles that gave birth to a unique new nation: conceived in liberty and dedicated to the proposition that all men are created equal. That Rosicrucian vision survives to this day and is well presented in these pages.”
— James Wasserman, author of The Templars and the Assassins

“Textbook versions of early American history comprise little more than a propaganda veneer obscuring the occult forces that really drove the British colonization of our continent. Nowhere are these sub-rosa influences more credibly exposed and their leading conspirators better identified than by Steven Sora in his latest book, Rosicrucian America.”
— Frank Joseph, author of Power Places and the Master Builders of Antiquity

Steven Sora has been researching historical enigmas since 1982 and is the author of The Triumph of the Sea Gods, The Lost Treasure of the Knights Templar and Secret Societies of America’s Elite. He lives in Allentown, Pennsylvania.
Loading...
or support indie stores by buying on