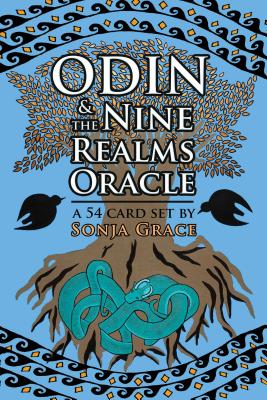 • Includes 54 full-color cards depicting Norse deities, runes, and mythic beings with a message from the Nine Realms and a book offering guidance and card spreads

• Draws on universal themes, present in every culture or tradition, such as love, fear, purpose, power, medicine

• Illustrated with the author’s original artwork, inspired by her upbringing in Native American and Norse cultures and based on her interpretation of Norse mythology

Norse mythology is rich with meaning and symbolism carried down through the ages. Diving deep into the profound wisdom of the Nordic traditions, Odin and the Nine Realms Oracle presents a unique divination tool created by mystic and healer Sonja Grace. Inspired by Sonja’s ability to communicate with the Norse gods and spirit travel back in time, this deck of 54 cards features the famed Norse gods Odin, Thor, Loki, and goddess Freyja alongside some of the lesser known but equally powerful deities such as Frigg, Rán, Tyr, and Baldur. The cards evoke the mysteries of the Nine Realms of Asgard, Midgard, Vanaheim, Jotunheim, Nlflheim, Muspelheim, Alfheim, Svartalfheim, and Hel. These nine worlds are held in the branches and roots of the great tree of Yggdrasil, the World Tree located at the very center of the Universe. Also depicted in these oracle cards are 24 runes, among them Gebo (gift), Naudiz (need), and Wunjo (joy), each one with a meaning and purpose that can stand singularly and in combination with other cards drawn from the deck.

The cards touch on universal themes such as love, fear, purpose, power, medicine, and energy, revealing new insight into and understanding of the enigma of life. Each card’s illustration is based on a hand-drawn original by Sonja Grace, representing everything from the sacred waters of the Norse, to the dwarves, elves, giants, runes, and gods. The cards’ powerful imagery allows you to deepen your connection to spirit and discover the hidden meanings of both direct and reverse placements of the cards. The included book shows you how to work with a range of different spreads, giving clearer insight and divine guidance on single questions as well as on more complex issues relating to past, present, and future.

Imbued with the knowledge and the power of a strong tradition, Odin and the Nine Realms Oracle can help clarify your path and provide guidance for your life’s unfolding.

Sonja Grace is a highly sought after mystic, healer, artist and storyteller with both Norwegian and Native American heritage. As an intuitive healer, she has been counseling an international roster of clients for over thirty years. Sonja's ancestral background is a fascinating blend of Native American Choctaw and Cherokee descent and Norwegian. She has been adopted on the Hopi Reservation, where she is considered a medicine woman. The award-winning author of Spirit Traveler, Become an Earth Angel, and Dancing with Raven and Bear, Sonja has appeared multiple times with George Noory on Beyond Belief and Coast to Coast AM. She lives in Arizona with her husband.

Praise For Odin and the Nine Realms Oracle…

"Quality magnetic flip top box containing a set of cards and instruction book. The images are hand drawn and painted and have a beauty and power within their simplicity. An interesting deck!"
— Wendy Stokes, Mind Body Soul Reviews

“Odin & the Nine Realms Oracle by Sonja Grace is a delightful mix of intuitive and traditional deck design. The art is done by the deck’s author/designer and is an inspired mash up of her Norwegian and Native American heritage. The deck features 54 cards of well-known Norse deities like Odin, Freya, and Thor; an assortment of runes, and of course the Nine Realms of Asgard, Midgard, Vanaheim, Jotunheim, Nlflheim, Muspelheim, Alfheim, Svartalfheim, and Hel. As with all oracle decks, my preferred method of use is the single card draw. And since the deck comes with a substantial book, featuring card images for each card in the deck, looking up card interpretations is easy. It also features 8 spreads that work with the deck. The companion book is sturdy and will hold up under repeated use and the book and deck fit into a solid cardboard box that has one of those nice magnetic closures...Odin & the Nine Realms Oracle is a unique and interesting take on the oracle deck. Its obvious audience is anyone interested in Norse mythology, but is wonderful for anyone looking for something different to add to their collection."
— Magical Buffet

"This deck and accompanying 144 page guidebook comprise this visually striking divination tool containing images and channeled information from Sonja Grace’s spirit travels with the Norse gods. She describes her spirit travels to the Nine Realms of Norse cosmology and her meetings with the gods in the guidebook’s prologue, then she brings the gods and the Norse world to life in the cards with her simple yet iconic, bold and gorgeous art work. I drew Naudhr, Hel and Dagaz - right on the money!! There is a description of each card’s interpretation, both upright and reversed, except for the runes which cannot be reversed. The set comes in a nice heavy box with a magnetic side closure. If you are interested in exploring the Norse cosmology and the runes, this deck is a good, inviting place to start to start or deepen your connection to these archetypes."
— PaganPages.org

"Regardless of what seems to be a fairly high interest in Nordic mythology, there aren’t many decent oracle decks out there to depict the Old Norse tradition in a way that suits my fancy. I should know, because I’ve been looking for them high and low. It was with great pleasure then, to receive Sonja Grace’s oracle deck Odin and the Nine Realms. Being both the creator of the deck itself and the accompanying booklet, Sonja has a knack for going back to basics with 54 full-color cards depicting Norse deities, runes, and mythic beings with a message from the Nine Realms and a book offering guidance and card spreads. Sonja’s presentation of this ancient belief system is well balanced and very straight forward. I recommend this deck to anyone interested in knowing more about Nordic mythology, and who wants to try an interesting version of divination."
— SOFIA KARIN AXELSSON, The Echo World
or support indie stores by buying on
Copyright © 2020 American Booksellers Association