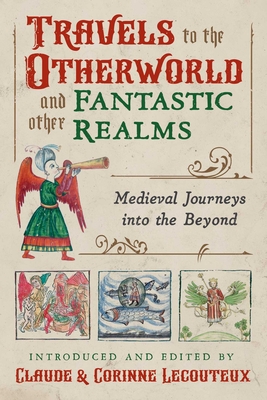 Travels to the Otherworld and Other Fantastic Realms

Medieval Journeys into the Beyond

A collection of tales from the Middle Ages that reveal voyages to Heaven and Hell, the realm of the Faery, mystical lands, and encounters with mythic beasts

• Shares travelers’ accounts of voyages into the afterlife, alarming creatures of unparalleled strangeness, encounters with doppelgangers and angels, chivalric romantic misadventures, and legends of heroes

• Explains how travelers’ tales from the Middle Ages drew on geographies, encyclopedias, travel accounts, bestiaries, and herbals for material to capture the imagination of their audiences

Heading off to discover unknown lands was always a risky undertaking during the Middle Ages due to the countless dangers lying in wait for the traveler--if we can believe what the written accounts tell us. In the medieval age of intercontinental exploration, tales of sea monsters, strange hybrid beasts, trickster faeries, accidental trips to the afterlife, and peoples as fantastic and dangerous as the lands they inhabited abounded.

In this curated collection of medieval travelers’ tales, editors Claude and Corinne Lecouteux explain how the Middle Ages were a melting pot of narrative traditions from the four corners of the then-known world. Tales from this period often drew on geographies, encyclopedias, travel accounts, bestiaries, and herbals for material to capture the imagination of their audiences, who were fascinated by the wonders being discovered by explorers of the time.

Accompanied by rare illustrations from incunabula and medieval manuscripts, the stories in this collection include voyages into the afterlife, with guided tours of Hell and glimpses of Heaven, as well as journeys into other fantastic realms, such as the pagan land of the Faery. It also includes accounts from travelers such as Alexander the Great of alarming creatures of unparalleled strangeness, encounters with doppelgangers and angels, legends of heroes, and tales of chivalric romantic misadventures, with protagonists swept to exotic new places by fate or by quest. In each story, the marvelous is omnipresent, and each portrays the reactions of the protagonist when faced with the unknown.

Offering an introduction to the medieval imaginings of a wondrous universe, these tales reflect the dreams and beliefs of the Middle Ages’ era of discovery and allow readers to survey mythic geography, meet people from the far ends of the earth, and experience the supernatural.

Praise For Travels to the Otherworld and Other Fantastic Realms: Medieval Journeys into the Beyond…

“Through Travels to the Otherworld and Other Fantastic Realms, Claude and Corinne Lecouteux bring forward mythical narratives of our medieval ancestors as rich, tangible cosmologies for us to peer into. Just as these extraordinary heroes and creatures come alive in this collection, so does the Lecouteuxs’ passion for sharing them.”
— S. Kelley Harrell, M.Div., author of Runic Book of Days, rune reader, modern shaman, and creator of

“The authors provide a succinct and readable compendium of unexpected journeys from this world to those which lie just beyond our ordinary human experience, as recounted in several ancient and medieval sources: Greek, Latin, Arabic, Scots, Old Czech, and Middle High German. Some of these unknown lands are deep within the forest or over the horizon; others are above or below or within our terrestrial world--a parallel universe in a different dimension of space and time altogether but not inaccessible to bold adventurers or curious readers who often discover their real selves in these imagined realms.”
— Craig R. Davis, professor of English language and literature, medieval studies, and world literature

“Claude Lecouteux is the most versatile and wide-ranging of the scholars of the medieval imagination, and any book of his is a treat. Here, he and Corinne have given us both a good resource and great entertainment.”
— Ronald Hutton, professor of history at the University of Bristol, England, and author of Witches, Dr

“In a time when many traditional themes are trivialized, overdramatized, or, conversely, rendered bland for entertainment on film and television, here is a collection of timeless stories and legends from ancient texts, myth, and folklore, as they were presented to readers in the Middle Ages. I found this collection to be inspiring, well-chosen, and skillfully presented.”
— R. J. Stewart, author of The Merlin Tarot and The Underworld Initiation

“Travels to the Otherworld and Other the Fantastic Realms presents tales of traveling to the end of the Earth, traversing the globe in the name of love and/or vengeance, seeing the fires of Hell, and more! Along with these stories are rare illustrations from manuscripts and chapbooks. If you want to voyage to ancient, magical places, Travels to the Otherworld and Other Fantastic Realms by Claude and Corinne Lecouteux is a beautiful resource."
— The Magical Buffet

"Magnetic mountains, topless fairies, monster frogs of varied colours – what’s not to like in this collection of mediæval adventure stories? Claude and Corinne Lecouteux have collected tales in languages from Greek to Czech about heroes who step off the edge of ordinary reality and pass through strange worlds. Some are actual journeys out of the map, others venture into an uncanny fairy realm, while the Irish knight Tundal lies motionless between life and death while his soul travels through the afterlife. Bit of a mixed bag, then."
— Fortean Times

Corinne Lecouteux is a translator specializing in tales and legends. She lives in Paris.
Loading...
or support indie stores by buying on
(This book is on backorder)