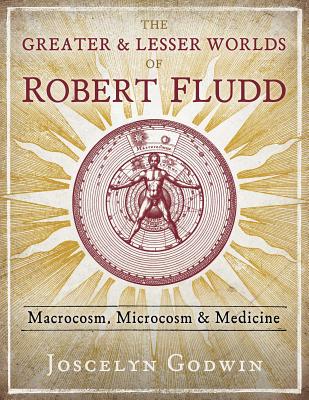 The Greater and Lesser Worlds of Robert Fludd

• Includes more than 200 of Fludd’s illustrations, representing the whole corpus of Fludd’s iconography, each one accompanied by Godwin’s expert commentary

• Explores Fludd’s medical work as an esoteric Paracelsian physician and his theories on the macrocosm of elements, planets, stars, and subtle and divine beings and the microcosm of the human being and its creative activities, including material never before translated

One of the last Renaissance men, Robert Fludd (1574-1637) was one of the great minds of the early modern period. A physician by profession, he was also a Christian Hermetist, a Rosicrucian, an alchemist, astrologer, musician, and inventor. His drive to encompass the whole of human knowledge--from music to alchemy, from palmistry to fortification--resulted in a series of books remarkable for their hundreds of engravings, a body of work recognized as the first example of a fully-illustrated encyclopedia.

In this in-depth, highly illustrated reference, scholar and linguist Joscelyn Godwin explains Fludd’s theories on the correspondence between the macrocosm of elements, planets, stars, and subtle and divine beings and the microcosm of the human being and its creative activities. He shows how Fludd’s two worlds--the macrocosm and the microcosm--along with Paracelsus’s medical principles and the works of Hermes Trismegistus provided the foundation for his search for the cause and cure of all diseases. The more than 200 illustrations in the book represent the whole corpus of Fludd’s iconography, each one accompanied by Godwin’s expert commentary and explanation. Sharing many passages translated for the first time from Fludd’s Latin, allowing him to speak for himself, Godwin explores Fludd’s thoughts on cosmic harmonies, divination, the kabbalah, astrology, geomancy, and the rapport between the multiple levels of existence. He also analyzes Fludd’s writings in defense of alchemy and the Rosicrucians.

An essential reference for scholars of Renaissance thinkers, traditional cosmology, metaphysics, and the Western esoteric tradition, this book offers intimate access to Fludd’s worlds and gives one a feel for an epoch in which magic, science, philosophy, spirituality, and imagination could still cohabit and harmonize within a single mind.

Praise For The Greater and Lesser Worlds of Robert Fludd: Macrocosm, Microcosm, and Medicine…

“Joscelyn Godwin has written a clearly expressed explanation and analysis of Robert Fludd’s enigmatic, voluminous encyclopedic works. This definitive volume will always be essential for understanding in detail what Fludd’s massive tomes encompassed.”
— William H. Huffman, Ph.D., author of Robert Fludd and the End of the Renaissance

“Beautifully written, this book allows the reader to skim or go deep with no danger of sinking. Never apologizing for Fludd’s idiosyncrasies and excesses, Godwin gets one thinking as Fludd did and hoped others would."
— Thomas Willard, Ph.D., professor of English at the University of Arizona

“This lavishly illustrated book is the definitive guide to Robert Fludd’s remarkable attempt at a grand synthesis of all human knowledge. Joscelyn Godwin’s superb scholarship and crystal-clear prose are without equal."
— Glenn Alexander Magee, Ph.D., editor of The Cambridge Handbook of Western Mysticism and Esotericism

“Robert Fludd attempted to embrace the whole of nature and man and of theory and practice in his volumes on the macrocosm, the microcosm, and medicine and worked out his ideas through striking images. Joscelyn Godwin, in this masterly book, lays out the whole of Fludd’s world in all its splendor.”
— Charles Burnett, Ph.D., professor of the history of Islamic influences in Europe at the Warburg Inst

Joscelyn Godwin was born in Kelmscott, Oxfordshire, England on January 16, 1945. He was educated as a chorister at Christ Church Cathedral School, Oxford, then at Radley College (Music Scholar), and Magdalene College, Cambridge (Music Scholar; B.A., 1965, Mus. B., 1966, M.A. 1969). Coming to the USA in 1966, he did graduate work in Musicology at Cornell University (Ph. D., 1969; dissertation: "The Music of Henry Cowell") and taught at Cleveland State University for two years before joining the Colgate University Music Department in 1971. He has taught at Colgate ever since.
Loading...
or support indie stores by buying on