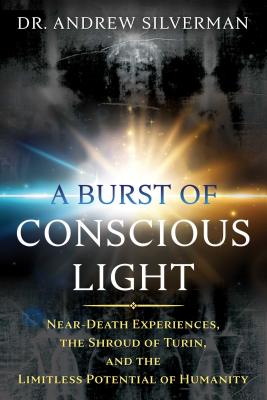 A Burst of Conscious Light

Near-Death Experiences, the Shroud of Turin, and the Limitless Potential of Humanity

Stephen Hawking once said that the unanticipated consequences of artificial intelligence will be the greatest threat to humanity’s survival. In this book, Dr. Andrew Silverman reveals why the powerful consciousness of the human mind could never be manufactured and so cannot be reproduced with technology.

Integrating extensive scientific research from three seemingly unrelated fields of study--quantum mechanics, near-death experiences, and the Shroud of Turin--Silverman reveals the pitfalls and perils of artificial intelligence and addresses the fundamentally flawed thinking that underlies it. Drawing on his work as one of the leading experts on the Shroud of Turin as well as research by scientists from NASA and Los Alamos, he shows how the image on the Shroud could only have been produced by a flash of light as intense as a nuclear explosion--a burst of light that occurred after the body was in the tomb. Sharing medical evidence of consciousness in people declared clinically dead, the author shows how the light of consciousness evidenced by the Shroud is also a consistent feature of most near-death experiences.

Exploring the non-local nature of consciousness--how it transcends the physical brain and body, Silverman explains why the human mind cannot be reduced to a computer and examines what separates sentient beings from machines. He shows how getting caught up in the push for artificial intelligence and the technological quest for immortality--through the attempt to “download” our minds onto computers--will only lead us to devalue and erase what makes us unique and irreplaceable in this cold, dark universe: our humanity.

Praise For A Burst of Conscious Light: Near-Death Experiences, the Shroud of Turin, and the Limitless Potential of Humanity…

"Dr. Silverman's summation of the scientific evidence relating to the Shroud of Turin is mesmerising, logical and highly articulate. This is a stunning and highly accessible book."
— Dr Carol Grbich, Emeritus Professor, Flinders University

“In this intriguing book, Andrew Silverman shows that consciousness is fundamental and not merely the product of a brain. Many eminent scientists have been driven to this conclusion by evidence from quantum physics. This is also supported by evidence from near-death experiences (NDEs) in which clear conscious perceptions continue while the brain is not functioning. During NDEs many people experience a very bright light that emanates pure and unconditional love, undivided knowledge, and universal interconnectedness. This groundbreaking book presents cogent scientific evidence that this same light is the fundamental basis for existence itself and that we all contain a spark of this light. A very original book that is based on up-to-date interpretations of modern science. Highly recommended.”
— Pim van Lommel, cardiologist and author of Consciousness Beyond Life

“The modern scientific view of the world is shifting rapidly due to the converging evidence of a mental universe from quantum physics and neuroscience. Dr. Silverman’s brilliant opus represents an important milestone in catalyzing this world awakening, which ultimately will weave science and spirituality together again for the betterment of all humankind!”
— Eben Alexander, M.D.,author of Living in a Mindful Universe, Proof of Heaven, and The Map of Heaven

Recognized as a leading scientific expert on the Shroud of Turin, Dr. Andrew Silverman is a medical doctor with a background in physics. For over thirty years, he has been conducting research on the mind-matter continuum, near-death experiences, and the Shroud. He has presented his findings in peer-reviewed scientific papers and at international scientific conferences. He lives in Buckinghamshire, England.
or support indie stores by buying on