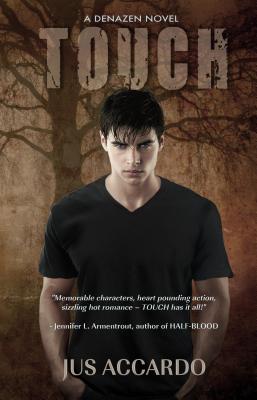 When a strange boy tumbles down a river embankment and lands at her feet, seventeen-year-old adrenaline junkie Deznee Cross snatches the opportunity to piss off her father by bringing the mysterious hottie with ice blue eyes home.Except there's something off with Kale. He wears her shoes in the shower, is overly fascinated with things like DVDs and vases, and acts like she'll turn to dust if he touches her. It's not until Dez's father shows up, wielding a gun and knowing more about Kale than he should, that Dez realizes there's more to this boy and her father's "law firm" than she realized.Kale has been a prisoner of Denazen Corporation an organization devoted to collecting "special" kids known as Sixes and using them as weapons his entire life. And, oh yeah, his touch? It kills. The two team up with a group of rogue Sixes hellbent on taking down Denazen before they're caught and her father discovers the biggest secret of all. A secret Dez has spent her life keeping safe.A secret Kale will kill to protect.


Praise For Touch, Book One…

4 ½ stars, RT Top Pick. “Accardo’s debut, first in the Denazen series, is infused with pulse-pounding action, attitude, charm, romance, suspense and enough witty dialogue to crown it one of the best YA novels of the year.” — Diane Morasco, RT Book Reviews

“Memorable characters, heart pounding action, sizzling hot romance — Touch has it all! Definitely fresh and new. You need to read this book like yesterday.” — Jennifer L. Armentrout, author of Half-Blood and Obsidian   “Raw and emotional; just like its heroine, Touch packs a mean right hook. Jus Accardo’s action-packed debut is sure to win her a legion of fans.” — Inara Scott, award-winning author of The Candidates and The Marked

Jus Accardo is the author of YA paranormal romance and urban fantasy fiction. A native New Yorker, she lives in the middle of nowhere with her husband, three dogs, and sometimes guard bear, Oswald. When not writing, Accardo can be found volunteering at the local animal shelter or indulging her passion for food. After being accepted to the Culinary Institute of America, she passed on the spot to pursue a career in writing and has never looked back. As far as she's concerned, she has the coolest job on earth ? making stuff up for a living.
Loading...
or
Not Currently Available for Direct Purchase