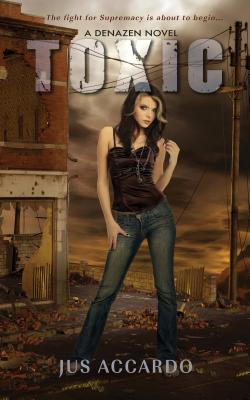 When a Six saved Kale’s life the night of Sumrun, she warned there would be consequences. A trade-off. Something taken for the life they gained. But Dez never imagined she’d lose the one thing she’d give anything to keep… And as if it’s not enough Dez finds her immunity to Kale fading, the Six brought in to help Kale learn to control his killer touch starts drooling on him the moment they meet. Worse than that? Jade can touch Kale. But bimbo Barbie is the least of Dez’s problems.

After Dez and Kale got away at Sumrun, her father lost not only his most powerful weapon but an important piece of the Supremacy project. Forced by Denazen to remedy the situation, he poisons Dez and offers her a choice—surrender to Denazen for the cure…or die. Determined to find a solution that doesn’t involved being bagged and tagged—or losing someone she loves—Dez keeps the poison a secret. But when a rash of Denazen attacks hit a little too close to home, Dez is convinced there’s a traitor among them. Jade.

Sacrifices, broken promises, and secrets. Dez will have to lay it all on the line if there’s any hope of proving Jade’s guilt before they all end up Residents of Denazen. Or worse, dead…

4 ½ stars, RT Top Pick. “Accardo’s debut, first in the Denazen series, is infused with pulse-pounding action, attitude, charm, romance, suspense and enough witty dialogue to crown it one of the best YA novels of the year." — Diane Morasco, RT Book Reviews

“Memorable characters, heart pounding action, sizzling hot romance — Touch has it all! Definitely fresh and new. You need to read this book like yesterday.” — Jennifer L. Armentrout, author of Half-Blood and Obsidian
“Raw and emotional; just like its heroine, Touch packs a mean right hook. Jus Accardo’s action-packed debut is sure to win her a legion of fans.” — Inara Scott, award-winning author of The Candidates and The Marked

Jus Accardo is the author of YA paranormal romance and urban fantasy fiction. A native New Yorker, she lives in the middle of nowhere with her husband, three dogs, and sometimes guard bear, Oswald. When not writing, she can be found volunteering at the local animal shelter or indulging her passion for food. After being accepted to the Culinary Institute of America, she passed on the spot to pursue a career in writing and has never looked back. As far as she?s concerned, she has the coolest job on earth ? making stuff up for a living.