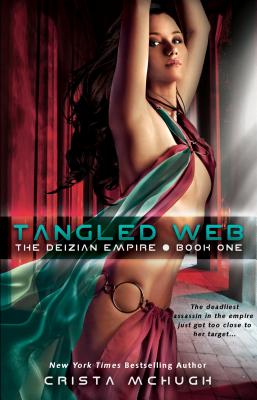 Azurha, a former slave turned deadliest assassin in the empire, has just been offered the ultimate challenge--seduce, then murder the new Emperor. But Titus is not the tyrant his forefathers were, and his radical ideas might be the glimmer of hope the empire needs.

Titus Sergius Flavus has yet to master the powerful magic of his ancestors--magic he must wield if he's to protect his people--but his father's death has left him no choice. Rule the Deizian Empire and attempt to right his ancestors' wrongs, or watch her fall to his greedy kin.

More than just Titus' ideas hold Azurha captive. Night after night, he awakens desires she thought lost, and uncovers the magic of her hidden lineage. As her deadline approaches, Azurha is forced to make an impossible decision--complete her job and kill the man she loves, or fail and forfeit both their lives.

Growing up in small town Alabama, Crista McHugh relied on storytelling as a natural way for her to pass the time and keep her two younger sisters entertained. Of course, that also means she's inclined to suffer some of the same maladies that plague many southern writers like overuse of simile and metaphor, exaggeration, melodramatic writing style, and the ever-popular long-winded sentence.

She currently lives in the Audi-filled suburbs of Seattle with her husband and daughter, maintaining her alter ego of mild-mannered physician by day while she continues to pursue writing on nights and weekends.

Just for laughs, here are some of the jobs she's had in the past to pay the bills: barista, bartender, sommelier, stagehand, actress, morgue attendant, and autopsy assistant.

And she's also a recovering LARPer. (She blames it on her crazy college days)
Loading...
or
Not Currently Available for Direct Purchase