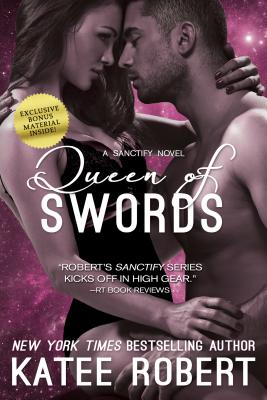 When the cards tell Ophelia Leoni she's supposed to marry the Prince of Hansarda, the gunrunner grits her teeth and boards the starship that comes for her. It doesn't matter if the ship's commander is the gorgeous stranger she just spent a wild, drunken night with. As a Diviner, she's painfully aware the cards don't lie. Ever.

Boone O'Keirna knows Ophelia is trouble the second he sees the way she moves. Not about to let the deadly little hellcat marry his sadistic half-brother, Boone pretends to be the Prince's emissary and kidnaps Ophelia. Too bad they can't be in the same room without him wanting to throw her out an airlock or into bed.

Even as they fight each other and their explosive attraction Ophelia and Boone sense something is wrong. Too much is going their way. Soon, they realize while the cards may never lie, the truth is sometimes hidden between them...and the future king of Hansarda is not one to take defeat lying down.

Katee Robert learned to tell stories at her Grandpa's knee. Her favorites then were the rather epic adventures of The Three Bears, but at age twelve she discovered romance novels and never looked back. Now living in Eastern Washington, she spends her time in between ogling men and planning for the inevitable zombie apocalypse writing speculative romance novels."

Praise For Queen of Swords…

"Intricate world-building, a wounded hero, and a fabulous love story. Queen of Swords is Sci-fi romance at its best!" -Nina Croft, bestselling author of the Blood Hunter series