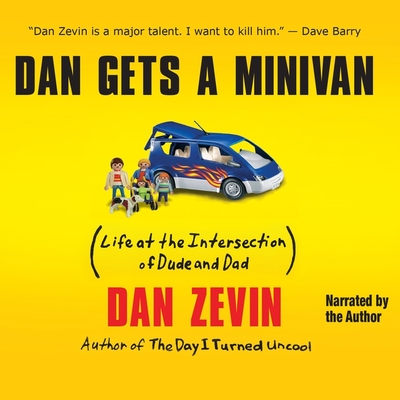 In the bestselling and beloved tradition of Dave Barry, a coming-of-middle-age tale by Thurber finalist Dan Zevin, master of "Seinfeld-ian nothingness" (Time) about a man's inevitable transition into midlife and fatherhood. The least hip citizen of Brooklyn, Dan Zevin has a working wife, two small children, a mother who visits each week to "help," and an obese Labrador mutt who prefers being driven rather than walked. How he got to this point is a bit of a blur. There was a wedding, and then there was a puppy. A wife was promoted and transferred to New York. A townhouse. A new baby boy. A new baby girl. A stay-at-home dad was born. A prescription for Xanax was filled. Six years passed in six seconds. And then came the minivan. Not just a daddy book, Dan Gets a Minivan is about a guy who happens to be a dad. Acclimating to adulthood has never been his strong suit, and this slice-of-midlife story chronicles the whole hilarious journey--from instituting date night to joining Costco; from touring Disneyland to recovering from knee surgery; from losing ambition to gaining perspective. Where it's all heading is anyone's guess, but, for Dan, suburbia's calling--and his minivan has GPS.

Dan Zevin has been a comic correspondent for NPR, the humor columnist for "Boston Magazine" and the "Boston Phoenix," and a contributor to national publications, including "Rolling Stone, Maxim, Details, Elle, Cosmopolitan," and "Glamour."
Loading...
or
Not Currently Available for Direct Purchase