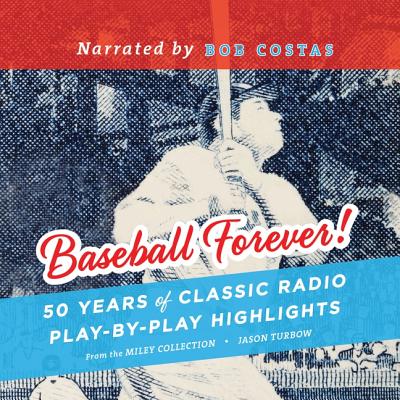 John Miley has compiled the most comprehensive audio account of baseball history in existence--a vast and wildly entertaining assemblage of game tapes from throughout the sport's history. His archive contains classic moments, like the Shot Heard 'round the World, and amazing feats, like Carl Hubbell striking out Babe Ruth, Lou Gehrig, Jimmie Foxx, Al Simmons, and Joe Cronin--in order--in the 1934 All-Star Game. Narrated by Bob Costas, Baseball Forever brings you highlights from Miley's collection, with numerous clips available for the first time since their original transmission. Bestselling author Jason Turbow (The Baseball Codes) mines the archive with Miley himself, taking us to some of baseball's greatest settings--Yankee Stadium, Ebbets Field, Fenway Park--while guided by the game's legendary broadcasters, like Mel Allen, Red Barber, Harry Caray, and Vin Scully. Miley and Turbow have carefully selected an abundance of highlights for Baseball Forever that is sure to inform, entertain, and appeal to anybody nostalgic for baseball's storied history.

Jason Turbow is the author of "The Baseball Codes" (Pantheon, 2010), which NPR called "one of the all-time greats," and writes for "The New York Times, The Wall Street Journal" and "Sports Illustrated," among other publications. He lives in the San Francisco Bay Area with his wife and two children.

Bob Costas has won twenty-four Emmy Awards--more than any other sports broadcaster--and been a prominent part of the coverage of every major sport over the past three decades. His versatility has been recognized with awards and nominations in the categories of hosting, play-by-play, writing, journalism, news, and entertainment. He is the only person ever to have won Emmys in news, sports, and entertainment. Bob's peers have named him the "National Sportscaster of the Year" a record eight times, and in 2012, he was elected to the National Sportscasters and Sportswriters Hall of Fame and selected for the Walter Cronkite Award for distinction in journalism. Bob's thoughtful commentaries on a variety of issues have established him as one of his generation's most distinctive voices.
Loading...
or
Not Currently Available for Direct Purchase